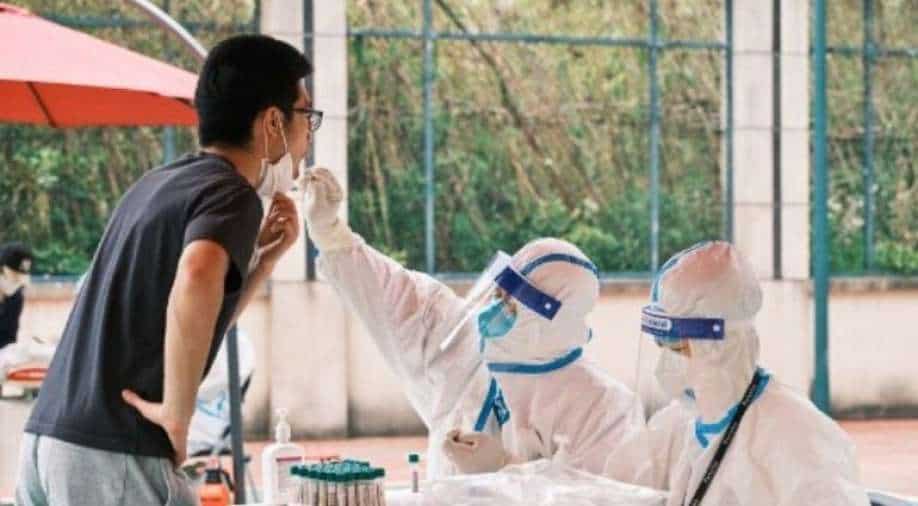 A health worker (C) wearing personal protective equipment conducts a swab test for the Covid-19 coronavirus in a compound during a Covid-19 lockdown in Pudong district in Shanghai. Photograph:( AFP )

Shanghai reported seven more Covid deaths on Tuesday. This comes after hundreds of thousands of cases were reported in the city during its week-long lockdown.

Even while the virus still continues to spread, the city officials announced the first deaths of this outbreak on Monday (April 18) with Tuesday's death toll bringing the total to an unbelievable low of 10 as per official figures.

According to Shanghai’s health official Wu Qianyu, who spoke at a press conference on Tuesday, the recent seven deaths were all the unvaccinated patients aged between 60 and 101 with underlying medical conditions such as diabetes and heart-related problems.

As per Shanghai Municipal Health Commission, the patients "became severely ill after admission to hospital, and died after ineffective rescue efforts, with the direct cause of death being underlying diseases".

On the other hand, Beijing claims its zero-covid policy of tight lockdowns and mass testing has prevented deaths and public health disasters that much of the rest of the world is battling with.

However, China has a massive senior population with a poor vaccination rate, which has raised questions over official figures.

AFP reports, unverified social media posts claimed that the fatalities in Shanghai were going unnoticed, but the messages were swiftly removed from the internet.

Since March 2022, many of the 25 million residents who have been restricted to their homes have been complaining about food shortages, harsh quarantine conditions and strict police handling policing on the internet.

The country's social media was flooded with protest footage that spread faster than the Chinese government’s ability to remove them.

Since the virus first emerged in late 2019 in the central Chinese city of Wuhan, the country’s zero-tolerance approach to covid has limited new cases to a trickle.

Nearly 350 million people in at least 44 cities in the country are in some sort of lockdown as per one estimate released on Monday.