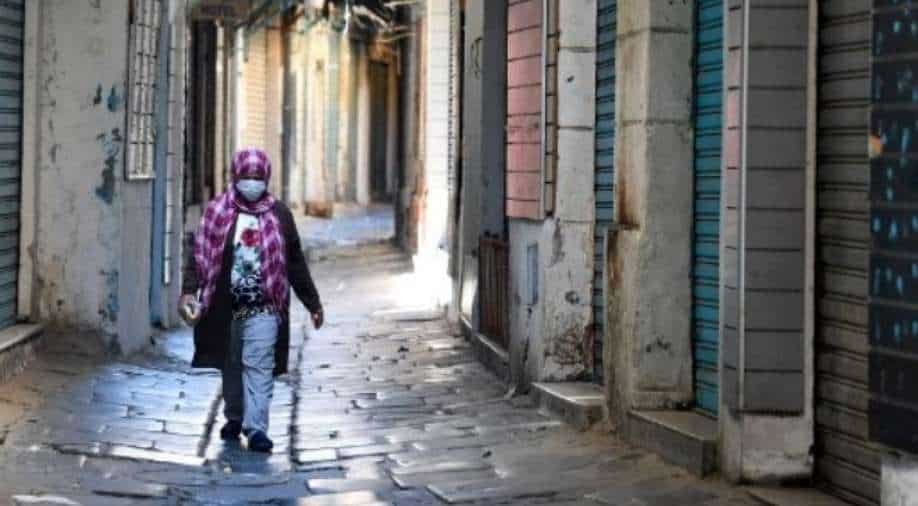 A Tunian woman walks along an alley of the deserted souk of Tunis, amid a general confinement imposed by the authorities in a bid to slow down a surge in coronavirus infections, on May 9, 2021. Photograph:(AFP)
Follow Us

According to the US Institute of Health Metrics and Evaluation, if the current rate of spread continues unchecked, Tunisia’s death toll can reach 50,000 by September

Despite having Africa’s highest number of reported deaths per capita, Tunisia has ended its one-week lockdown.

Lat year initially, thanks to a sweeping six-week lockdown, Coronavirus cases in Tunisia were low. Borders were closed, only essential activity was allowed, these precautions appeared to have halted the spread of the COVID-19 virus.  But now, according to Our World in Data figures, since easing that lockdown cases have increased manifold, with Tunisia reporting the highest daily reported infections and deaths in Africa.

According to the US Institute of Health Metrics and Evaluation, if the current rate of spread continues unchecked, Tunisia’s death toll can reach 50,000 by September. To date, of the 11.7 million population, Tunisia has had at least 11,899 deaths with the reported number of infected people at 327,473.

In Tunisia, Vaccines have been available since March. However, due to high widespread mistrust of the vaccine, even among the healthcare workers, take-up i.e., the number of people opting to get vaccinated is low. Shockingly so far only five people have registered on the Tunisian government’s website.

The situation was made worse by a hidden-camera prank show, which while featuring an Angelina Jolie lookalike invited Tunisia’s celebrities to lead the vaccine initiative, only to then be met with a scene where “recipients” of the vaccine would fall sick and die. WHO also complained about the show, which was broadcasted on former presidential candidate Nabil Karoui owned channel.

One a source of national pride, Tunisia’s health sector is at the risk of collapsing under the weight of this pandemic.  According to economists, the African nation’s funding for health has witnessed a steady fall over the years, more so after Islamic State gaining power, due to which cash was diverted towards strengthening the country’s domestic security.

Health workers also staged a three-day strike over the working conditions and pay across the health sector. While, a video footage obtained by Deutsche Welle, a German broadcaster shows patients sleeping on the floors of crowded waiting rooms, while one patient was lying down on top of a cupboard. With the oxygen demand constantly threatening to eclipse the available supply, Oxygen masks are at a premium.

Tunisia’s initial covid response won a lot of applause, but it came at a cost that’s shaping Tunisia’s present policy. “Unemployment has exploded from 15 per cent at the start of 2020 to 17.4 per cent at the end of the year,” said Radhi Meddeb, an economist, adding that the virus has had such a devastating impact on the economy which shrunk by 8.8 per cent during the pandemic, “leaving little if no room for manoeuvre for the government in terms of social support”.

Although the government has offered tax relief and government loans, the economic burden has proven to be too much for the Tunisians. Especially, with much of its workforce made up of daily wagers or day labourers, who are not eligible for government schemes.

With many cafes and restaurants stayed open in defiance of the restrictions, the lifting of lockdown was driven equally by the streets and the MPs.

“This inability to implement public health measures is a reflection of the growing absence of trust in the government, which is in my opinion the most worrying sign.”, said Dr Zied Mhirsi, director of Global Health Strategies.

“Roles and responsibilities are split within different ministry directorates and institutions, and that does not help for quick decision-making. It is also important to note that we have weak contact tracing, testing, monitoring and evaluation capabilities,” he added.

As witnessed in many countries, in Tunisia too, the economic pain of lockdown was seen as a greater risk than the virus, said Youssef Cherif, head of Columbia University’s Global Center in Tunis. “This low public concern has led to an increase in cases and to thousands of deaths in the last few months.

“Those who were directly hit, including my family, feel it, but those who were spared the grief and sorrow of this virus continue to live normally – until they are stricken.”