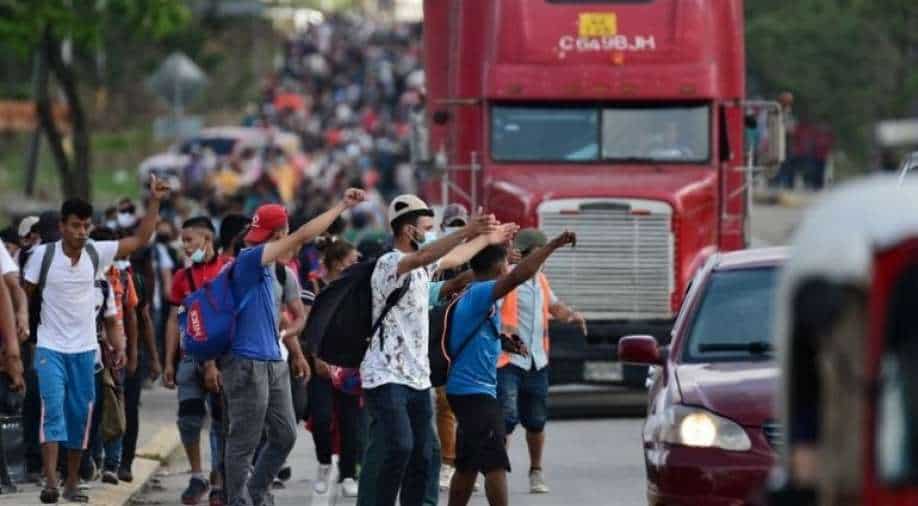 Migrants heading to the border with Guatemala on their way to the United States, hitchhike in La Entrada, in the Honduran department of Copan, on January 15, 2021. Photograph:( AFP )

Global migration has slowed down by nearly 30 per cent, owing to restrictions that were put in place to contain the ongoing coronavirus pandemic

Global migration has slowed down by nearly 30 per cent, owing to restrictions that were put in place to contain the ongoing coronavirus pandemic. A United Nations report from Friday revealed that two million fewer people migrated between 2019-20 than expected.

In 2020, 281 million people were living outside their country of origin, the report added.

Titled “International Migration 2020”, the report showed how two-thirds of registered migrants lived in less than 20 countries.

The United States topped the list, hosting over 51 million migrants in 2020.

In terms of the largest diasporas in 2020, India topped the list. 18 million Indians were living outside their country of birth in 2020.

Other countries with a large population outside their country of origin include Mexico, Russia with 11 million each, followed by China with 10 million, then by Syria with eight million.

The most number of migrants lived in Europe in 2020 - 87 million to be precise.

Almost half of foreign migrants moved nearby their countries of origin. In Europe, for instance, seventy per cent migrants that were born in Europe are now living in a different European country.

Out of the international migrants, refugees accounted for 12 per cent of those, as per the report.

Also read: US sues Facebook for allegedly favouring immigrants over US workers

The global climate crisis could see more than 63 million people displaced from their homes within South Asian countries in the next 30 years, according to a new report.

According to a report by ActionAid International and Climate Action Network South Asia, if global warming continues on its current path then the rising sea levels and droughts will force a huge part of South Asian population to migrate.