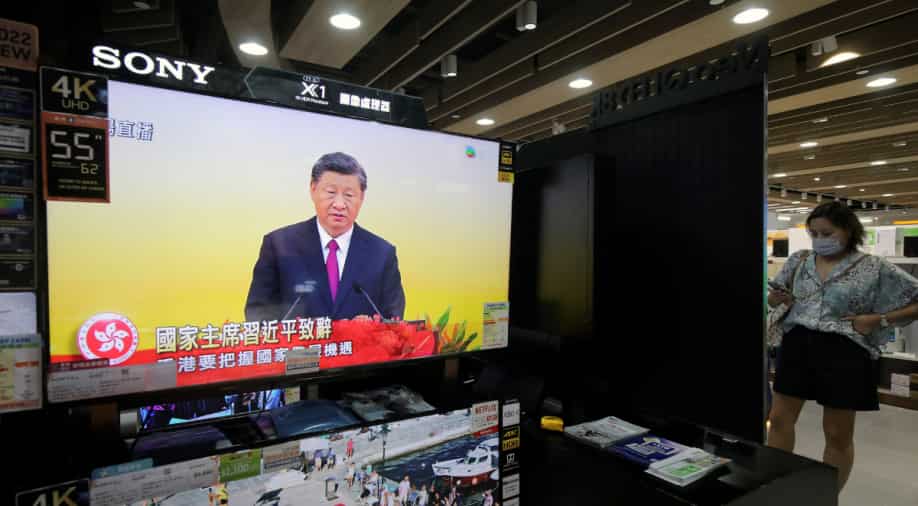 A television shows live broadcast of Chinese President Xi Jinping's speech at the swearing-in ceremony on the 25th anniversary of the former British colony's handover to Chinese rule, at an appliances store in Hong Kong, China July 1, 2022. Photograph:( Reuters )

A Hong Kong lawmaker has tested positive for the coronavirus (COVID-19), news agency AFP reported on Sunday (July 3). The Covid result came to light after he posed for a group photo with Chinese President Xi Jinping during the leader's visit to Hong Kong for the 25th anniversary of the city’s handover. Concerns have been raised as strict measures were adopted to counter the spread of coronavirus during the occasion.

Steven Ho Chun-yin, a 42-year-old member of Hong Kong's largest pro-Beijing party tested positive for Covid. He was one of about 100 officials granted close contact with Xi for a photo call on Thursday afternoon. He sits in the city's rubber-stamp legislature, the report by AFP added.

A report by the South China Morning Post revealed that Chun-yin represents the agriculture and fisheries functional constituency. The report further mentioned that he is self-isolating.

He said on social media: "The sample on June 30 came back negative. The July 1 sample was classified as uncertain, containing a low viral load with an extremely low risk of transmission. But to protect public safety, I did not participate in the activities on July 1."

The photo session took place on June 30, the first day of Jinping's two-day visit to the city. He apparently stood behind the president in the middle of the third row. During the photo session, everyone was wearing a face mask.

Reports mentioned that the lawmaker tested negative on the first day of Xi's visit on Thursday and returned an uncertain test on Friday. He did not take part in any events on Friday after the uncertain test result, he said in a message on social media.

Ho wrote: "The sample of July 1 was one with extremely low infectivity and it was categorised as 'uncertain', but for the sake of public security, I did not participate in the events on that day."

Ho was the second member of the DAB party to have tested positive around Xi's visit. Tam Yiu-chung, Hong Kong's sole representative to Beijing's top lawmaking body, tested positive on Thursday and was absent from all events.