COP26: Protesters gather in London ahead of climate summit 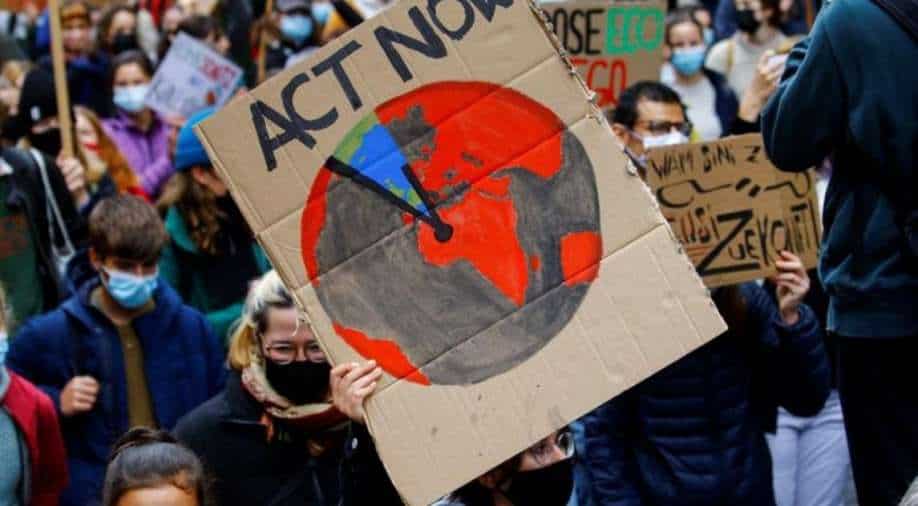 Protesters gather in London ahead of climate summit Photograph:( Reuters )

Protesters started gathering Friday in the heart of London's historic financial district to lobby against the use of fossil fuels in the run-up to the start of the UN climate summit in the Scottish city of Glasgow.

The protests in London, which were set to be joined by Swedish activist Greta Thunberg, are part of a worldwide day of action before leaders head to Glasgow for the start of the UN Climate Change Conference, known as COP26.

Many environmentalists are calling the October 31-November 12 gathering the world's last chance to turn the tide in the battle against climate change.

Activists in London started their day of action at the Climate Justice Memorial outside the insurance marketplace of Lloyd's of London They laid red flowers spelling out 'Rise Remember Resist' at the protest site.

The protesters are demanding that the global financial system stop investing in the use of fossil fuels.
They are expected to campaign outside a number of London locations throughout the day.

International bank Standard Chartered is set to be the focus of the main action in the early afternoon, followed later by a vigil at the Bank of England. There are also actions planned at British banks Lloyds and Barclays.

The protesters included people who traveled from the front line of climate change in Asia and the Pacific to call out the banks they say are responsible for financing activities they blame for the destruction of their homes.

Across the world, demonstrators were taking to the streets to urge action now, including in coal-reliant Poland where city sirens sounded at noon in Warsaw and other major cities.

Poland's government has been slow in embracing new climate goals, arguing that the country needs time to phase out its dependence on coal and pivot toward more renewable sources.

The summit in Glasgow is taking place a year late because of the coronavirus pandemic.

Six years ago in Paris, nearly 200 countries agreed to individualized plans to fight global warming.
Under the Paris pact, nations must revisit their previous pledges to curb carbon pollution every five years and then announce plans to cut even more and do it faster.

The hope is that world leaders will cajole each other into doing more, while ensuring that poorer nations struggling to tackle climate change get the financial support they need.

The headline goal set in Paris was to limit warming to 1.5 degrees Celsius (2.7 degrees Fahrenheit) since preindustrial times.