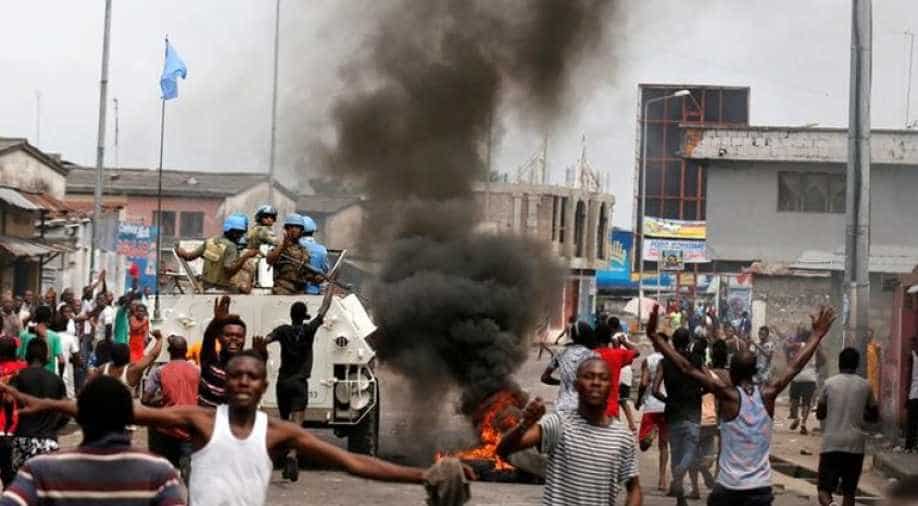 Security forces shot dead at least 26 protesters who had gathered in the streets of Kinshasa and other cities of Democratic Republic of Congo on Tuesday to demand that President Joseph Kabila step down after his mandate expired overnight.

Scattered protests started on Tuesday, and opposition leader Etienne Tshisekedi called on the Congolese people to peacefully resist Kabila, who has remained in power beyond his constitutional mandate with no election to pick a successor.

The government spokesman could not be reached for comment and a police spokesman had no information on deaths.

Gunfire crackled in several districts of the capital, Kinshasa, a city of 12 million, as measures to thwart dissent raised fears of bloody repression.

With a ban on demonstrations in force and a heavy military presence, Kinshasa's normally busy main boulevards were mostly deserted as pockets of youths gathered in side streets only to be dispersed by volleys of teargas.

By sunset, the city was calm, although littered with debris from earlier rioting. Youths played football in the streets.

Scores of people were arrested, especially in the eastern city of Goma, rights groups said. Reuters witnesses saw more than a dozen young men who had been arrested seated in the back of a military truck near the university.

"I'm gravely concerned by the arrests of those who seek to express their political views," the head of the UN mission, Maman Sidikou, said in a statement, adding that UN staff had not been able to consistently gain access to jails to gather information on how many people had been arrested.

He called on Congo to end "politically motivated detentions".

UN peacekeepers in armoured personnel carriers patrolled the streets, at one point cheered on by a crowd shouting: "Kabila, know that your mandate is finished!"

A police spokesman said he did not have enough information to comment.
The mayor of Lubumbashi, Jean Oscar Sanguza, told Reuters that security forces had intervened to stop looters.

In the city of Kananga, in central Congo, fighting between security forces and a local clan militia shut down the airport.

Kabila, who has ruled since his father, Laurent Kabila, was assassinated in 2001, rarely speaks about the issue in public, but his allies say the election was delayed because of logistical and financial problems.

The constitutional court has ruled Kabila can stay on until the vote takes place.

In a video posted on YouTube, opposition leader Tshisekedi called on people to "not recognise the ... illegal ... authority of Joseph Kabila and to peacefully resist (his) coup d'etat."Authorities have blocked most social media.

Western powers are nervous about a repeat of the conflicts between 1996 to 2003 that killed millions, drew in half a dozen neighbouring armies and saw rebel fighters rape women en masse. Congo has never experienced a peaceful transition of power.

The United States and European Union have called for Kabila to respect the constitution. Congo's former colonial master, Belgium, said on Tuesday it would "re-examine" relations with Kabila, and France urged the European Union re-examine its links with Congo.