Colombian court decriminalises abortion up to 24 weeks of gestation 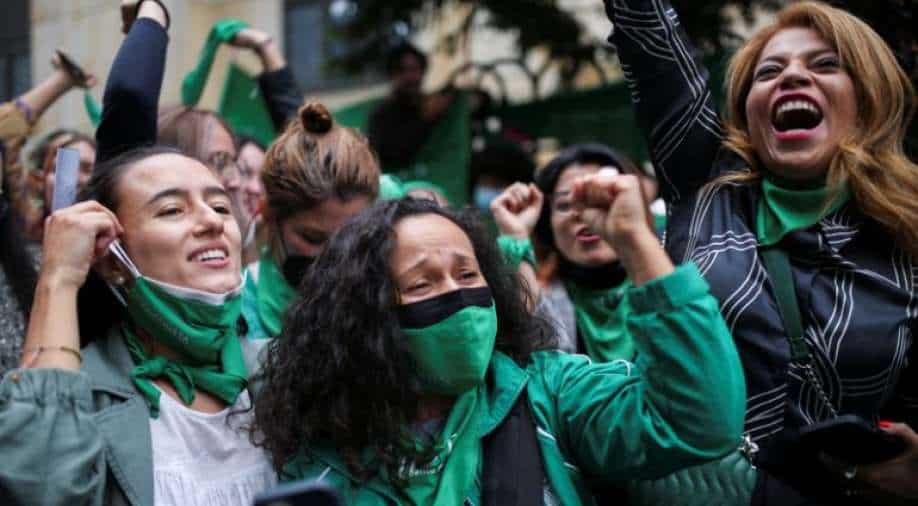 Abortion was partially legalized in Colombia under a 2006 court decision which allowed it only in cases of rape, fatal fetal deformity and health of the woman, without any time limits

Judges on Colombia's constitutional court voted on Monday to decriminalize abortion until 24 weeks of gestation, the court said in a statement, in a victory for abortion rights groups that sued to have the procedure removed from the penal code.

The decision adds Colombia to a list of Latin American countries which have recently liberalized abortion access, including Mexico and Ecuador.

Abortion was partially legalized in Colombia under a 2006 court decision which allowed it only in cases of rape, fatal fetal deformity and health of the woman, without any time limits.

Under Monday's ruling, backed by five of nine judges, women will not be prosecuted for seeking abortions up to 24 weeks of gestation, after which the procedure will only be allowed under the original three conditions.

"The practice of abortion will only be punishable when it is conducted after the twenty-fourth week of gestation and, in all cases, this time limit will not apply to the three conditions laid out in Ruling C-355 of 2006," the court said in a statement.

Also read | End of the road in Colombia for Escobar's 'cocaine' hippos?

Congress and the national government must urgently implement policies to protect the rights of pregnant women, the court's statement added, including family planning services, eliminating obstacles to abortion care and help with adoptions.

The Causa Justa coalition, which sued for decriminalization in September 2020, estimates around 90% of abortions in the country take place clandestinely, putting women's lives at risk as they seek dangerous alternatives to seeing a doctor. "We did it!" the coalition, which is made up of more than 90 feminist organizations, said on its Twitter account.

Its supporters, many sporting green to represent the abortion rights movement and some crying, celebrated outside the court.

CHANGE ACROSS THE REGION

Incoming Chilean President Gabriel Boric has vowed to make the procedure freely available, as it is in Argentina and Uruguay under certain time limits.

Abortion rights advocates said the decision was not the end of their fight for full legalization.

"We hope that the next step for Colombia will be the total decriminalization of abortion, in order to protect women's reproductive autonomy at all times," Nancy Northup, president of the New York City-based Center for Reproductive Rights, said in a statement.

The coalition argued in its suit that prosecutions of women and girls who sought or obtained abortions have worsened stigma and scared doctors and patients, even in cases when one of the three legal conditions has applied.

Some 350 women were convicted or sanctioned for abortions between the original 2006 ruling and mid-2019, including at least 80 girls under the age of 18, according to Causa Justa.

A ruling had originally been expected late last year, but the decision has been repeatedly delayed amid a recusal request from a judge and other procedural debates.

Dozens of protesters opposed to abortion were also outside the court on Monday.

"We don't want either legal or clandestine abortion," said Daniela Clavijo, who was protesting before the ruling. "We are asking the court to totally penalize abortion, so there's never any condition for abortion."