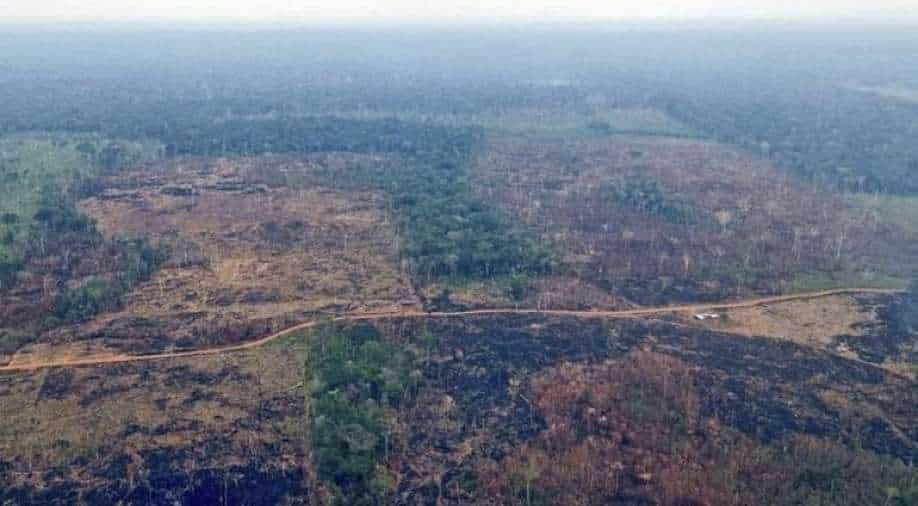 In this handout picture released courtesy of the European Union Delegation to Colombia, burned trees are seen after a forest fire in the Department of Guaviare, northwest of the Colombian Amazon  Photograph:( AFP )

Bogota on Sunday issued an environmental alert over bad air quality due to the forest fires that have raged for days in Colombia's Amazon.

As per the authorities, the poor air quality spans an area which is the size of greater Paris.

In the central province of Guaviare, governor Haydeer Palacio declared a "red alert" due to forest fires that have engulfed 10,000 hectares of land.

The wind carried smoke from several fires blamed on armed groups some 350 kilometers (220 miles) to the northwest, all the way to the Colombian capital.

He also published photos of 17 people on a wanted list for setting the Colombian Amazon's forests on fire.

FARC was created in 1964 as a left-wing armed force operating against the Colombian government. In 2017, after a disarmament process, it became the Common Alternative Revolutionary Force political party. Nevertheless, in August 2019, former FARC leader Ivan Marquez declared his return to the armed struggle.

More than 90 per cent of coca plantations are located in the so-called Silver Triangle, consisting of Colombia, Peru, and Bolivia.

According to an Environment Ministry report, January of this year was the hottest month in the Colombian Amazon in a decade, also leading to an increase in forest fires in the southeastern region and very likely impacting air quality in the capital.