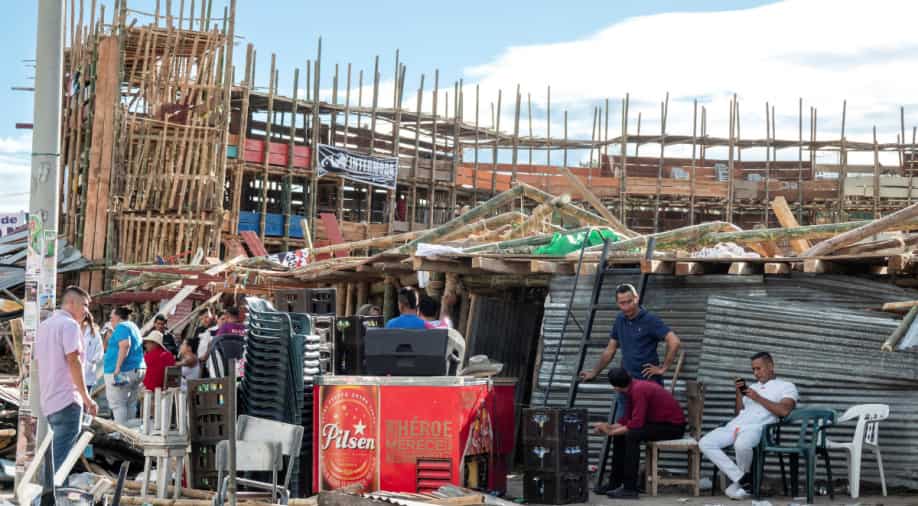 Residents gather near the rubble of some stands that collapsed in a bullring during the celebrations of the San Pedro festivities, in El Espinal, Colombia Photograph:( Reuters )

The partial collapse of the grandstand at a bullring in Columbia has left four dead and more than 300 injured. The popular event, during which members of the public face-off with small bulls, was being held on the feast day of Saint Peter and Saint Paul.

A full three-story section of wooden stands filled with spectators can be seen toppling forward into the ring and throwing dozens of people to the ground in several videos posted on social media.

The videos showed a bull roaming in the arena while were people trying to escape from the stands but were unable to do so because of the rush and chaos.

After the accident in the town of El Espinal, Tolima provincial governor Jose Ricardo Orozco told local Blu Radio that "There are four dead at this moment - two women, a man, and a minor."

Adding that he did not know exactly what the stand was constructed with but it appeared to be wooden boards, Vellez said ambulances were sent from the nearby cities of Ibague and Melgar to help the injured.

Expressing his solidarity with the families of those killed and hurt., Colombia's outgoing President Ivan Duque said on Twitter "We will request an investigation of the facts about what happened."

Saying they were dangerous and promoted animal abuse, Orozco said the departmental government would move to ban the so-called "corralejas" in which residents try their luck in the ring.

Also see | Who is Gustavo Petro, the ex-guerilla who's Colombia's first leftist leader

Joining Orozco in calling for the amateur bullfights to be banned, President-Elect Gustavo Petro, who will take office on August 7, highlighted that he had put a stop to bullfights in Bogota when he was its mayor.

Bullfights and cock fights are protected because of the cultural history behind them in Columbia even though animal abuse is a crime in the country.