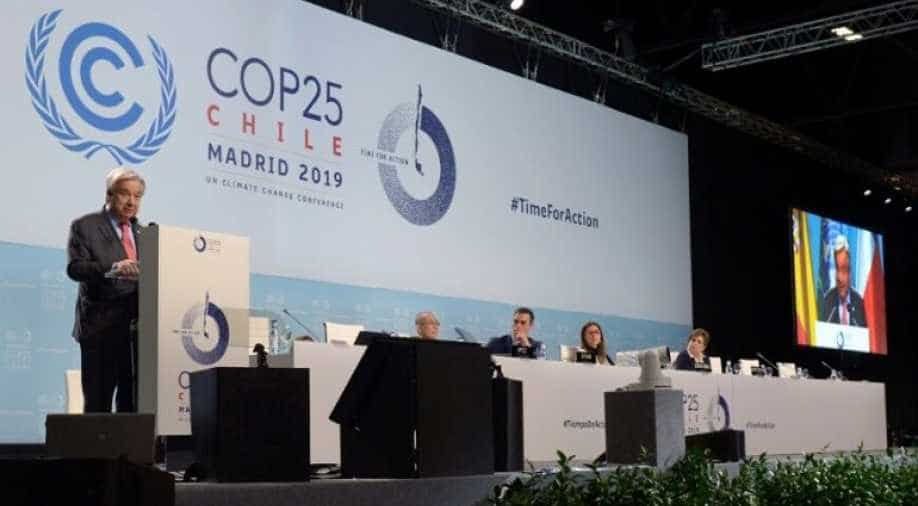 In an impassioned appeal, the UN chief worked through a long list of worrying signs, including new figures released Tuesday by the World Meteorological Organisation.

Confronted with a climate crisis threatening civilisation itself, humanity must choose between hope and surrender, UN chief Antonio Guterres told the opening plenary of the UN COP25 climate conference Tuesday.

"One is the path of surrender, where we have sleepwalked past the point of no return, jeopardising the health and safety of everyone on this planet," Guterres said.

"Do we really want to be remembered as the generation that buried its head in the sand, that fiddled while the planet burned?"

In an impassioned appeal, the UN chief worked through a long list of worrying signs, including new figures released Tuesday by the World Meteorological Organisation (WMO).

The last five years have been the hottest ever recorded, the WMO said, and the concentration of planet warming CO2 in the atmosphere has reached levels not seen in three to five million years.

"The last time there was a comparable concentration," Guterres said, "the temperature was two to three degrees Celsius warmer, and sea levels were 10 to 20 metres higher than today."

The 2015 Paris Agreement calls for capping global warming at "well under" 2C, and 1.5C if possible.

A major UN science report reset the threshold for a climate-safe world from 2C to 1.5C.

"Permafrost in the Arctic is thawing 70 years ahead of projections," Guterres continued. "Antarctica is melting three times as fast as a decade ago. Ocean levels are rising quicker than expected."

"More than two-thirds of the world’s megacities are located by the sea."

More than 150 million people will find themselves in coastal flood zones by 2050, according to recent research.

To prevent temperatures from rising more than 1.5 degrees, the global economy must be carbon neutral by mid-century, a landmark UN report said last year.

"The best available science, through the Intergovernmental Panel on Climate Change (IPCC) tells us today that going beyond that (1.5C) would lead us to catastrophic disaster," Guterres said.