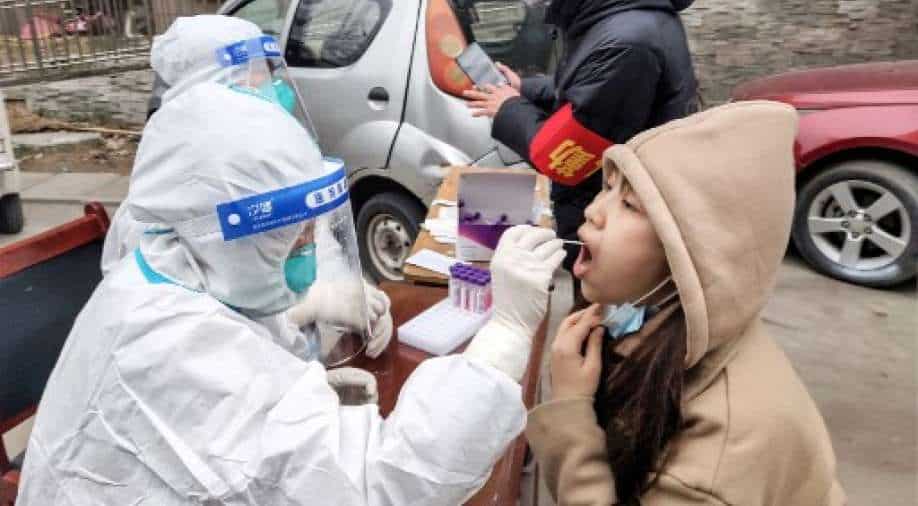 A resident undergoes a nucleic acid test for the COVID-19 in Anyang, China Photograph:( AFP )

The laboratory said it will "actively cooperate" with authorities. However, authorities haven't clarified the COVID-19 rules which were broken.

As China continues to battle the coronavirus pandemic, reports say a medical laboratory manager in Henan province has been detained for allegedly spreading the virus.

The Chinese official has been detained over “suspected criminal offences”. The man reportedly worked in Zhengzhou KingMed Clinical Laboratory Centre.

The laboratory said it will "actively cooperate" with authorities. However, authorities haven't clarified the COVID-19 rules which were broken.

Local police said Zhang violated the law and "committed acts" which caused the virus to spread. The incident took place in Henan's Yuzhou which has reportedly over a million inhabitants.

The alleged virus violaters were accused of transporting illegal migrants in China with the borders under close scrutiny by authorities due to the virus outbreak.

Henan province has been badly hit by the virus with 87 new coronavirus cases reported on Tuesday. China has been battling against the virus since September last year with the Delta variant spreading rapidly.

The authorities had earlier lockdown Xi'an city as the Omicron variant began to spread as further restrictions were imposed in the Chinese port city of Tianjin.

Also Read: After Xi’an, China locks down another city as Omicron cases detected

Chinese authorities have been following a "zero-COVID" policy, however, several cities have witnessed a surge in COVID-19 infections due to Omicron in recent weeks. The country is set to host the Winter Olympics next month with officials worried the Omicron variant may engulf large parts of the country.

China had earlier announced the suspension of several international flights including from the US even as it urged citizens not to travel during the Lunar New Year.