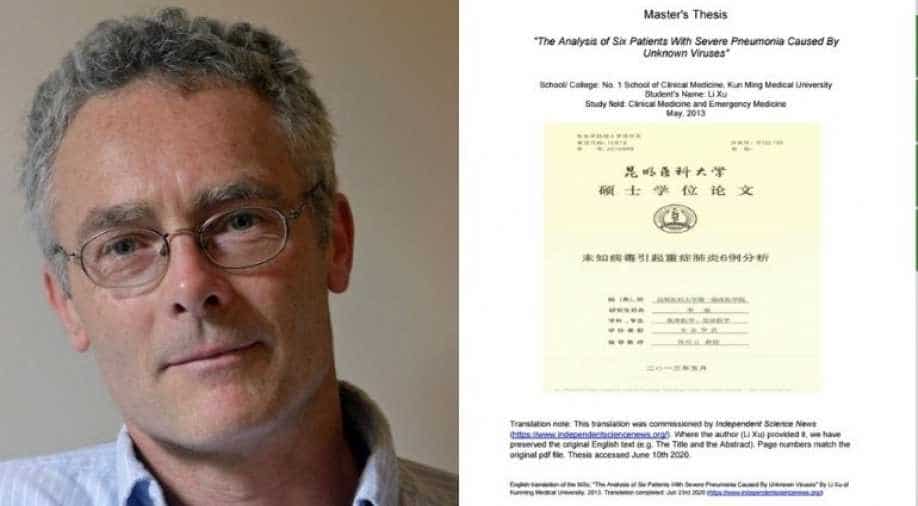 Jonathan Latham believes that WHO is reportedly not investigating a lab escape possibility, which is now the leading theory and this should be a source of embarrassment to the WHO

The coronavirus pandemic, which first appeared in a seafood market in the Hubei province of Wuhan city in China, late December 2019, has now claimed over 800,000 lives. However, the question of its origin still remains unanswered and has ruled the global discourse for months. Now, the researchers believe that the Chinese government has access to samples and information that could prove or disprove a lab origin and it should provide access to all that data and material.

"The Chinese government has access to samples and information that almost certainly could prove or disprove a lab origin. It should provide access to all that data and material. It is in no one's interest to have speculation and the data be withheld", British virologist and biologist Jonathan Latham, Executive Director of the Bioscience Resource Project, a non-profit based in New York, told WION. His startling report of coronavirus' first appearance in 2012 sheds new light.

Latham, also an editor of the website Independent Science News, specialises in molecular biology, virology, and genetics. He believes that WHO is reportedly not investigating a lab escape possibility, which is now the leading theory and this should be a source of embarrassment to the WHO.

"The WHO is reportedly not investigating a lab escape possibility. Since a lab escape is now the leading theory, this should be a source of embarrassment to the WHO. But it also endangers the public in future. If we do not find out how the pandemic started, how do we prevent future ones?"

Also read: Wuhan officials kept China in the dark for weeks about coronavirus, US intel says

His report suggests that the severe acute respiratory syndrome coronavirus 2 (SARS-CoV-2), the virus that causes the coronavirus disease (COVID-19), may not have originated at a Wuhan wet market in 2019, but 1,000 miles away in 2012, in a Chinese mineshaft where workers fell ill with a mysterious, pneumonia-like illness after being exposed to bats. His findings (along with molecular biologist Allison Wilson) were based after translating a 66-page master’s thesis from the Chinese medical doctor who treated the miners and sent their tissue samples to the Wuhan Institute of Virology for testing.

"The core finding of our investigation derives from the fact that the closest ancestor virus to SARS-CoV-2 , the cause of the COVID-19 pandemic, is a virus called RaTG13. This virus was found in a mine near Mojiang in Yunnan Province, China, in 2012. What we uncovered is that shortly before RaTG13 was collected, six miners had become ill while clearing bat faeces inside the mine. Three of the miners had died after lengthy stays in hospital. The symptoms of the miners were essentially identical to COVID-19. In the hospital, at the time, it was concluded that the miners were suffering from infection by a novel coronavirus acquired from the bat faeces", said Latham.

"We also found that blood and probably other samples were taken from the miners to the Wuhan Institute of Virology (WIV). Our theory of how the pandemic came about is that RaTG13, which is a bat virus, infected the miners and became adapted to humans inside the bodies of the miners. The human samples taken to the WIV thus contained viruses that could cause COVID-19. We propose that these escaped when they were being examined at the WIV, presumably in late 2019. This theory thus explains why the pandemic started exactly in Wuhan when it could, in principle, have started anywhere in the world that has bats," he added.

Latham also reported that the individual Chinese researchers obscured the deaths of the miners even before the outbreak began and, moreover, that after the outbreak they further attempted to cover over the provenance of RaTG13.

"It is also clear that individual Chinese researchers obscured the deaths of the miners even before the outbreak began and, moreover, that after the outbreak they further attempted to cover over the provenance of RaTG13. For example, Zheng-Li Shi, head of coronavirus research at the WIV told the magazine Scientific American that the miners died of a fungal infection. Because of this misinformation it took us and others months to piece together the true history", said Latham.

After conducting multiple tests for hepatitis, dengue fever and even HIV, the doctor consulted with various specialists throughout China, including virologist Zhong Nanshan, an international hero, who managed the SARS outbreak in 2003 and is considered the country’s greatest scientist, which implies that the miners probably were infected by coronavirus.

"The meeting with such a prominent scientist as Zhong Nanshan implies that the possibility of an epidemic outbreak starting with the miners was being taken very seriously in 2012. But it also implies since Zhong Nanshan has a special expertise in coronaviruses, that the miners had a virus, and that it probably was a coronavirus".

Currently, across the world, the number of deaths due to COVID-19 has doubled to just over 800,000 since June 6, with 100,000 fatalities in the last 17 days alone, while more than 23 million cases have been registered.