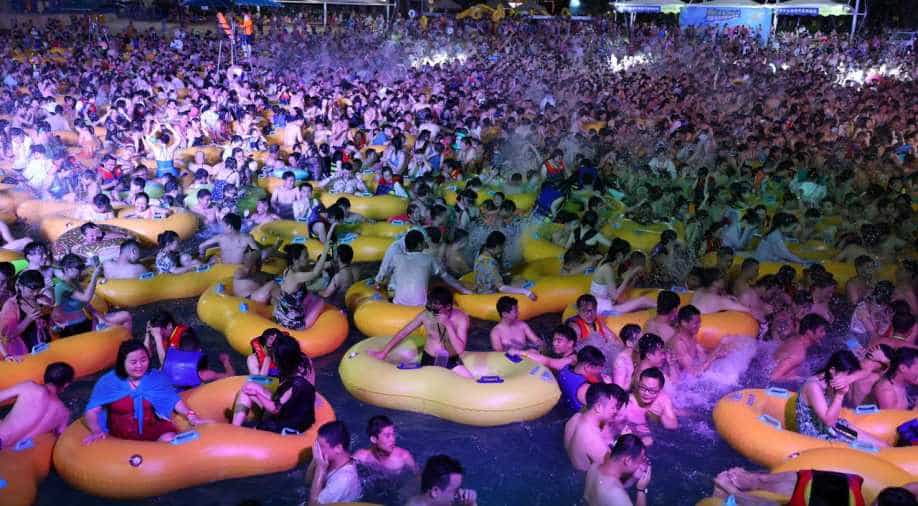 People are no longer required to wear masks outdoors, but they still need to wear masks when in close contact with others, a new guideline issued by the Beijing Centre for Disease Prevention and Control said.

People in China's capital Beijing are no longer required to wear masks outdoors, health authorities said on Friday, a second such announcement since May when it was reversed after a recurrence of coronavirus cases in the city.

According to official data, Beijing had 935 cases of coronavirus since February this year of which 924 have recovered. The city reported nine deaths.

People are no longer required to wear masks outdoors, but they still need to wear masks when in close contact with others, a new guideline issued by the Beijing Centre for Disease Prevention and Control said.

Under flashing lights and with dance music blaring, scores of people converged on a pool party on August 15 in the Chinese city of Wuhan where the novel coronavirus emerged late last year.

Videos and photos of an electronic music festival at the Wuhan Maya Beach Water Park showed face mask free revellers crammed into rubber dinghies and performers on stage partying, months after the city's lockdown was lifted in April.

Chinese state newspapers threw their support behind the party at the amusement park. A story in the Global Times, a tabloid published by the ruling Communist Party's People's Daily, cited Wuhan residents as saying the pool party reflected the city's success in its virus-control efforts.

Chinese football fans will return to the stadiums this Saturday when the gaming season begins. Thousands of fans will be allowed to attend a high-profile football match after they get tested.

China is portraying an image that all is well in the country and it is, therefore, returning to normalcy.

However, 48 Chinese workers were banned from entering a mine in Papua New Guinea because they might test positive for the Wuhan virus.

The workers had been due to fly from the northern city of Tianjin to the Ramu NiCo plant in northern Papua New Guinea run by state-run Metallurgical Corporation of China Ltd (MCC).

The Chinese state-backed firm insisted on sending them back to work. It said they have been given a vaccine for the virus. Although the world has no idea about the whereabouts of this vaccine, China metallurgical group corporation managed to get it and get it injected it into its employees.

When Papua New Guinea demanded an explantion behind the entire incident. China's foreign ministry spokesman Zhao Lijian said he was not aware of the matter, adding that he believes China's vaccine development strictly follows standardised scientific protocol, and that safety and effectiveness evaluations as well as ethical inspections are carried out in the research process.