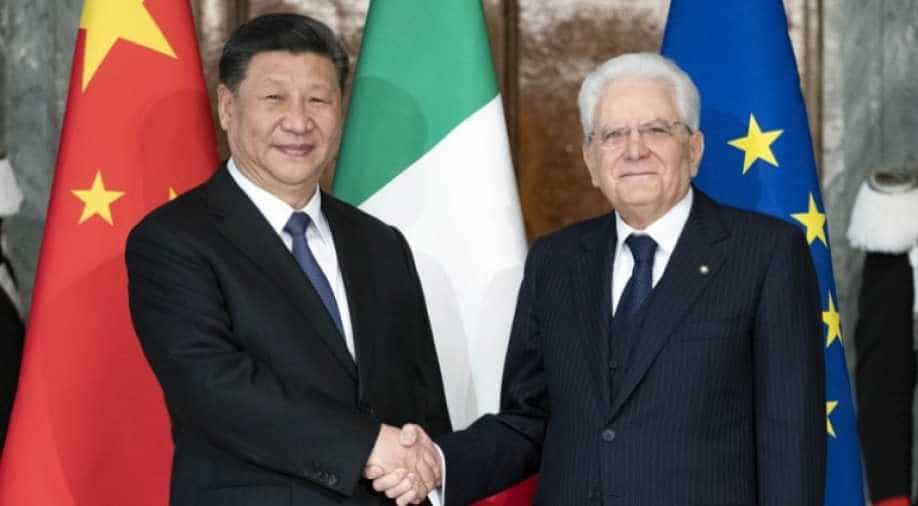 Prime Minister Giuseppe Conte is to sign a memorandum of understanding with Xi on Saturday for Italy to join the $1 trillion Belt and Road Initiative, the first G7 member to do so.

Prime Minister Giuseppe Conte is to sign a memorandum of understanding with Xi on Saturday for Italy to join the $1 trillion Belt and Road Initiative, the first G7 member to do so, despite apparent divisions within the ruling coalition.

Italy on Friday rolled out the red carpet for Xi, who met his Italian counterpart Sergio Mattarella amid great pomp, and was due to head to parliament in the afternoon.

Around 1,000 extra police have been deployed around Rome for the state visit before Xi heads to Palermo, where his singer wife Peng Liyuan reportedly wants to see the Teatro Massimo opera house.

In what some perceived as a snub, Italy's far-right Deputy Prime Minister Matteo Salvini said he would not attend Saturday's state dinner for Xi at Mattarella's Quirinal Palace.

The United States has warned European allies that Huawei could use its 5G technology as a "backdoor" for spying, while China has lashed out at "immoral" attacks.

"Today we say 'Italy first' in trade relations, while remaining US allies, in NATO and in the EU," Deputy Prime Minister Di Maio of the anti-establishment Five Star Movement said on the sidelines of a China-Italy business forum on Friday.

Allies' concerns about 5G could be allayed by strengthening the Italian government's so-called 'golden powers' to keep control of strategic industries and infrastructure, Di Maio said.

- 'Trojan horse' -
Debt-ridden Italy is technically in recession and keen to have more business with China.

Xi's visit comes a week after the European Union released a 10-point plan outlining a shift to more assertive relations with Beijing, warning that China was a "rival" to the bloc as well as its biggest trading partner.

As he arrived for the EU summit in Brussels, Macron welcomed what he called Europe's "awakening" to the challenge posed by China.

But his office struck a more conciliatory tone in announcing Tuesday's talks, saying it was an opportunity to explain Europe's strategy and seek "points of convergence between Europe and China".

The meeting comes ahead of a China-EU summit in Brussels next month, as the bloc struggles to forge Europe-wide China policies.

- Strategic ports -
Beijing is particularly interested in investing in Italian ports to help funnel its products into Europe, amid warnings that Rome must avoid the model of the Greek port of Piraeus, which was taken over by Chinese shipping giant Cosco in 2016.

Supporters of the non-binding MoU said that it will lead to China complying with European Union standards, including on the environment and intellectual property, and cannot be compared to debt-inducing deals Beijing has signed with developing countries.

Despite apparent warming ties, Xi is not expected to meet Pope Francis.

The Vatican has diplomatic relations with Taiwan and not Beijing, so the encounter would be unlikely despite an agreement on appointing bishops in China signed last year.

Xi heads to Monaco on Sunday and then on to France to cap his European tour.