China will not start a trade war but will fight ones imposed on it: Chinese ambassador 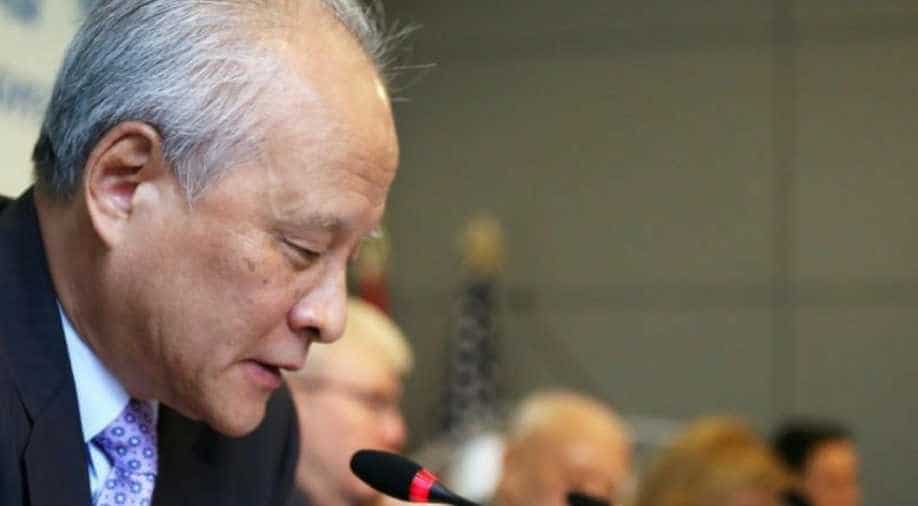 Chinese Ambassador to the United States Cui Tiankai said Thursday China would fight to the end to defend its own legitimate interests with all necessary measures if the US really wants to start a trade war.

Cui said China does not want to have a trade war with the United States or with anybody else, but China is not afraid of and will not recoil from one if somebody imposes a trade war on it.

Cui's remarks came after US President Donald Trump on Thursday signed a memorandum that could impose tariffs on up to 60 billion US dollars of imports from China, the latest unilateral move that poses a threat to global trade.

"As far as a possible trade war is concerned, we never wanted to start, but if somebody imposed a trade war on us, will fight to the end. As for the overall China-US relationship, we always believe that the right approach is to base ourselves on better mutual respect and expand our cooperation, manage possible differences in a constructive way, and achieve a win-win outcome. We still follow this approach, and we hope there will be reciprocity on the US side," said Cui in the interview with China Global Television Network (CGTN).

Trump has directed US Trade Representative Robert Lighthizer to publish a list of proposed Chinese goods that could be subject to tariffs in 15 days, while the US Treasury Department will have 60 days to propose restrictions on Chinese investment in the United States, according to the presidential memorandum.

The tariffs "could be about 60 billion" dollars, Trump said on Thursday at the White House before signing the memorandum.

But a senior White House official told reporters earlier in the day that the number would be close to 50 billion dollars.

The memorandum is based on a so-called Section 301 investigation into alleged Chinese intellectual property and technology transfer practices, launched by the Trump administration in August 2017.

The ambassador said the US accusations are totally groundless and called them a form of discrimination, noting that China always encourages innovation and that Chinese people are capable of immense innovation.

"I think such accusations are totally groundless. China encourages innovation. Chinese laws protect intellectual property rights. This applies to Chinese companies and American companies and other companies alike. We will do our utmost to make sure that intellectual property rights are protected, whether they are from Chinese companies or American companies. At the same time, I hope people here would understand or would realize, people in China and people in other developing countries are also fully capable of innovation. They should not believe that they have a monopoly over innovation, and everybody else is just stealing from them. I think this is a kind of discrimination," Cui said.

He called on the United States to opt for cooperation rather than confrontation to promote the healthy and stable development of China-US economic relations and trade in the long run.

"You see, we always advocate the idea of building up a new model of international relations and together with everybody else to build a community of mankind for a shared future. This is our philosophy. This is our basic approach to international relations, including our relationship with the United States, and we still stick to this. And I hope people in the US would have a better understanding of China's approach and would make the best choice. Actually, this is the choice between cooperation and confrontation, between constructiveness and disruptiveness, between win-win and lose-lose. I hope everybody will have really a good understanding of where their best interests lie, the long-term interest of both the Chinese people and the American people, if you have these long-term interests in mind the choice is clear," Cui said.

The memorandum follows Trump's recent tariff plan on steel and aluminium imports and January's tariffs levied on imported solar panels and washing machines. These unilateral moves have prompted strong opposition and warnings from business groups around the world.