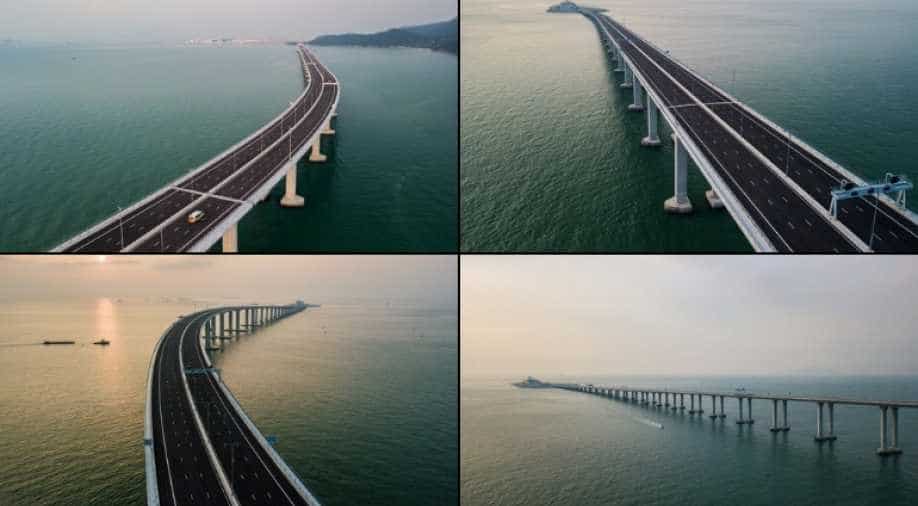 China's 'sea-crossing bridge' will slash travel time between Zhuhai in southern China and Hong Kong from three hours to 30 minutes — more closely integrating the Pearl River Delta which houses one of the world's most successful economies.

This "sea-crossing bridge" will slash travel time between Zhuhai and Hong Kong from three hours to 30 minutes — more closely integrating the Pearl River Delta which houses one of the world's most successful economies.

Chinese Vice-Premier Han Zheng said the bridge would help drive China's blueprint for a "Greater Bay Area" around the delta modelled on other global economic dynamos like the San Francisco and Tokyo bay areas.

The Greater Bay Area would encompass 11 cities, including Hong Kong and Macau, and be home to a combined 68 million people.

It was originally set to open in 2016 but faced a number of delays. That said, the engineering is still very impressive.

But, since its very inception, the bridge has been one of the most criticised initiatives in Hong Kong.

A number of residents believe it is a poor use of taxpayer's money. And despite the focus on drive time, private car owners in Hong Kong will not be able to use the bridge without a special permit.

Conservationists have also blamed the bridge for the falling numbers of threatened Chinese white dolphins..

Others say the bridge is another way for Beijing to bind the autonomous administrative regions of Hong Kong and Macau closer to the mainland.