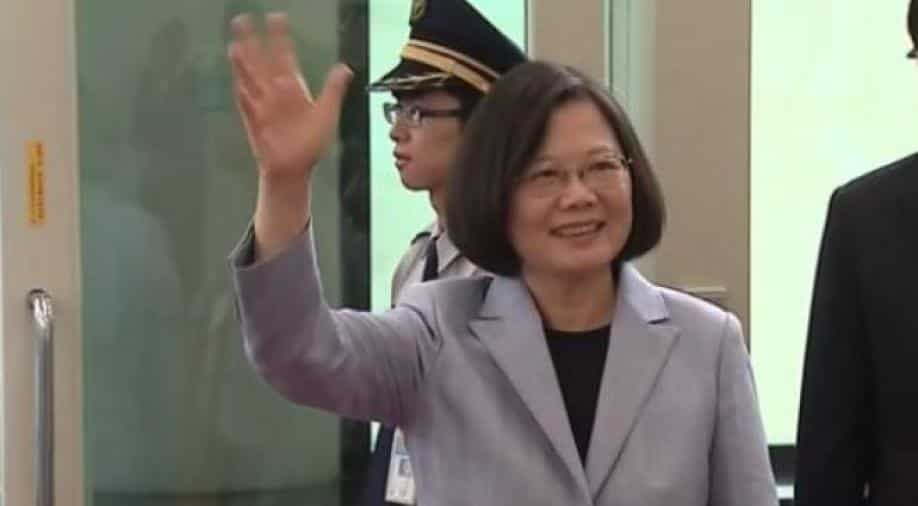 Taiwan, which says it is an independent country, has long been wary of Chinese attempts to sway its elections in favour of candidates who may look more kindly upon Beijing.

With just days to go before Taiwan's elections, its giant neighbour is trying a push-and-pull strategy on the island Beijing claims as Chinese territory, rattling its sabre while trying to coax electors with outwardly friendlier policies.

Taiwan, which says it is an independent country, has long been wary of Chinese attempts to sway its elections in favour of candidates who may look more kindly upon Beijing.

Fear of China has become a major element in the campaign, boosted not only by the anti-government protests in Chinese-ruled Hong Kong but also by a speech Chinese President Xi Jinping gave in January outlining China's "reunification" agenda, including threats of force.

Taiwan President Tsai Ing-wen and her team are pressing home a message that people need to "protect" Taiwan from China when they vote in the January 11 presidential and parliamentary election.

On Thursday, Taiwan's Defence Ministry said China had sailed another carrier group through the Taiwan Strait just weeks after the last mission.

"There it goes again!" he wrote. "Military threats like this only toughen Taiwan's determination to defend itself and preserve regional peace and stability."

A few days before that, retired but influential Chinese General Wang Hongguang outlined at a state-media organised forum in Beijing how China could bring Taiwan to its knees by invading its outlying islands and "terrifying" Taipei into submission.

At the same time, China has rolled out policies promising better treatment for the Taiwanese business community, which has invested billions in China, and on Saturday revised a law to give those promises a firmer legal basis.

China has also encouraged Taiwanese abroad, even in places where Taiwan has its own representative offices, to seek consular help from Chinese embassies.

Taiwan says China has sinister intentions, and it must defend its freedoms.

"How can we go backward, and become a second Hong Kong or Tibet?" he said.

China has ramped up pressure on Tsai since she won office in 2016, cutting off talks and flying bombers around Taiwan, believing she wants to push for the island's formal independence.

Tsai says Taiwan is already an independent country: the Republic of China, its official name.

China may have overreached recently, said one senior foreign envoy in Taipei, describing Xi's January speech as effectively "Xi campaigning for Tsai" because of how badly it was received in Taiwan.

Jin Canrong, Deputy Dean of the School of International Studies at Beijing's elite Renmin University and a government adviser, said Xi's speech marked a shift in policy away from preventing independence to actively promoting "reunification".

China is confident that it could successfully use force against Taiwan, he added.

"China really does have the military ability, which is the say the armed ability, to resolve the Taiwan issue," Jin said. "Although we would pay a price, in the end, we would win."

Any invasion would be bloody and difficult, as Taiwan's military is well-armed, though the island could probably not hold out for long unless US forces came quickly to their aid, military experts have said.

Opposition presidential candidate Han Kuo-yu of the Kuomintang (KMT) party, which favours close ties with China and who is trailing in the polls, says the best way to deal with China is to talk to Beijing and stop demonising the Chinese for electoral gain.

Han adviser Su Chi, a former general secretary of Taiwan's National Security Council, said he believed Xi was actually a "dove among the hawks" when it came to Taiwan and wanted a peaceful solution.

"There are loud voices in the mainland for using force to reunify Taiwan, especially in the People's Liberation Army. I think he (Xi) doesn't really want this," Su said.

But Tsai's returning to the office would not necessarily mean relations with China would continue to worsen, as Beijing may realise it must talk to her, said senior legislator Lo Chih-cheng of the ruling Democratic Progressive Party (DPP).

"If our party or our president continues to be in power, eventually China has to come to terms with the incumbent government. They refuse to talk to the DPP because they believe the KMT had a chance to come back," he told Reuters at his campaign office in a Taipei suburb.

"After seeing the probable defeat of the KMT, leaders in Beijing may believe that in the foreseeable future the KMT may not come back to power again," he added. "So it might be reasonable or sensible for them to come to terms with the DPP government."