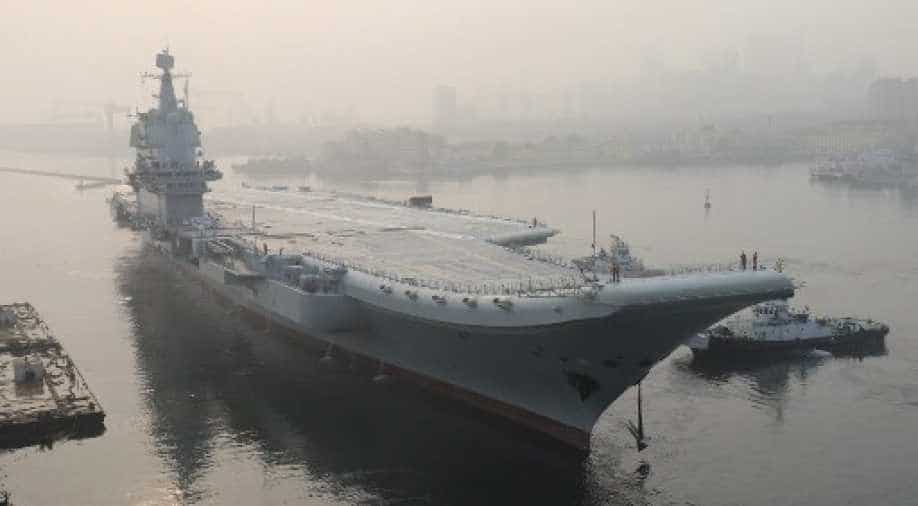 China's official Xinhua media had reported on Sunday that aircraft carrier was involved in 'scientific research' and that "the passage was not directed at any target."

China confirmed on Monday that its first domestically-built aircraft carrier had sailed through the Taiwan Strait for "routine" training and tests.

"It is not aimed at any specific target and has nothing to do with the current situation," navy spokesman Cheng Dewei said in the official social media account, AFP reported.

The Chinese Navy added, "the organization of the trials and drills of the domestic aircraft carrier through the region is a normal arrangement in the construction process of the aircraft carrier."

China's first domestically manufactured aircraft carrier is only known only as "Type 001A" to the outside world.

China's official Xinhua media had reported on Sunday that aircraft carrier was involved in "scientific research" and that "the passage was not directed at any target."

The move followed even as Taiwan's election campaign moved into full gear on Sunday with foreign minister Joseph Wu declaring that the country wouldn't be intimidated.

Wu tweeted saying: "Voters won't be intimidated! They'll say NO to China at the ballot box."

Taiwan's defence ministry said the aircraft carrier was trailed by US and Japanese ships, adding that ships and aircraft were scrambled to "monitor" and "ensure national security and safeguarding of regional peace and stability".

However, Reuters quoting  Japan Self Defence Forces spokesman saying that he had no information about the movement of the Chinese carrier or any Japanese ships nearby.

US defence secretary Mark Esper who was in Thailand over the weekend said: "Beijing is increasingly resorting to coercion and intimidation to advance its strategic objectives, at the expense of other nations."

China considers Taiwan to be a renegade province and has ratcheted up pressure in recent years in the Taiwan Straits by sailing its naval ships, a move often criticised by the Trump administration.

Accepting Tsai's nomination, Lai said: "In the face of a China which is closing in at every stage and warning signs from Hong Kong, what can the Democratic Progressive Party in next year's critical election battle give the people of Taiwan? Isn't our most important mission to unite and defend Taiwan?".

"I have decided to accept President Tsai's invitation, to be her deputy, to team up to fight the election, and at this darkest time to unite and defend Taiwan, to continue to show the ray of light of democracy, show the way for Hong Kong and illuminate the world," he added.