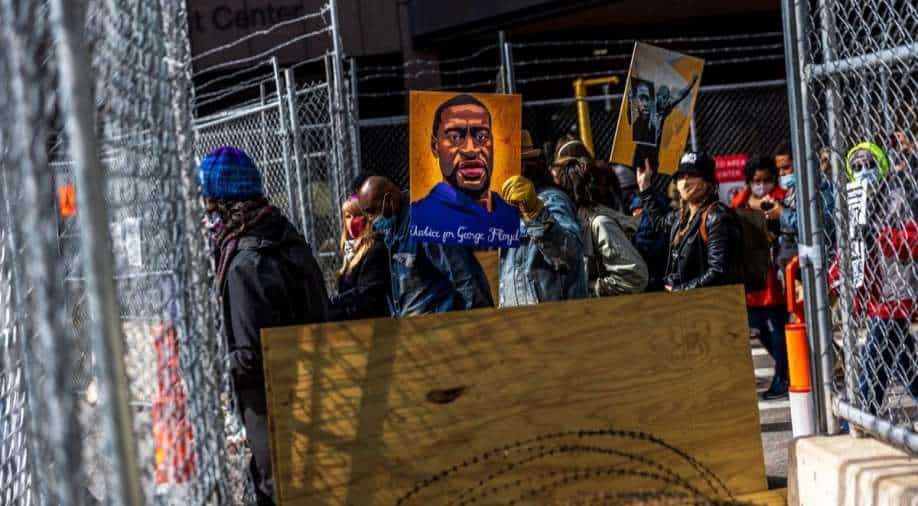 Protests for George Floyd in US Photograph:( AFP )

Lieutenant Richard Zimmerman, testifying for the prosecution on the fifth day of Chauvin's murder and manslaughter trial on Friday, said the sacked 19-year veteran officer had violated department policies on the use of force.

Police officer Derek Chauvin's use of force against George Floyd was "totally unnecessary," the longest-serving officer in the Minneapolis Police Department has testified.

Lieutenant Richard Zimmerman, testifying for the prosecution on the fifth day of Chauvin's murder and manslaughter trial on Friday, said the sacked 19-year veteran officer had violated department policies on the use of force.

Zimmerman had reviewed bystander video and police bodycam footage of Floyd's May 25, 2020 arrest by Chauvin and three other officers who are also facing charges.

Video shows Chauvin, who is white, kneeling on the neck of a handcuffed Floyd for more than nine minutes following the arrest of the 46-year-old Black man for passing a counterfeit $20 bill in a nearby store.

When asked what he thought about the 45-year-old Chauvin's use of force against Floyd, Zimmerman said: "Totally unnecessary."

"Pulling him down to the ground facedown and putting your knee on a neck for that amount of time, it's just uncalled for," he said.

Floyd's death sparked protests against racial injustice and police brutality across the United States and around the world.

Prosecutors are seeking to prove that Chauvin's actions led to the death of Floyd, who was lying on his stomach, facedown in the street saying repeatedly: "I can't breathe."

Zimmerman, who joined the Minneapolis Police Department in 1985 and currently heads the homicide unit, was asked if he had been trained to "kneel on the neck of someone who is handcuffed behind their back in the prone position?"

"Once a person is cuffed, the threat level goes down, all the way," he said. "They're cuffed. How can they really hurt you?"

Zimmerman also said that once a suspect is in handcuffs "you need to get them out of the prone position as soon as possible because it restricts their breathing."

"You need to turn them on their side or have them sit up," he said.

Zimmerman's testimony came a day after that of the police sergeant who had been Chauvin's shift supervisor on the day of Floyd's arrest.

David Pleoger, who has since retired, was asked by prosecutors to give his opinion about the use of force in Floyd's arrest.

"When Mr Floyd was no longer offering up any resistance to the officers they could have ended their restraint," Pleoger said.

Derek Smith, a paramedic, testified on Thursday that Chauvin and other police officers were still on top of Floyd when he and a fellow paramedic arrived on the scene.

Smith said he checked the carotid artery in Floyd's neck to see if he had a pulse. "I did not feel one," he said. "In lay terms, I thought he was dead."

Floyd was loaded into an ambulance and the paramedics tried to revive him using chest compressions and a defibrillator. Their efforts were unsuccessful.

Chauvin, who has been in court every day taking meticulous notes and consulting with his attorney, faces up to 40 years in prison if convicted of the most serious charge -- second-degree murder. His trial is to resume on Monday and is expected to continue for another three weeks.

The other three former police officers involved in the arrest -- Tou Thao, Thomas Lane, and J Alexander Kueng -- are to be tried separately later this year.