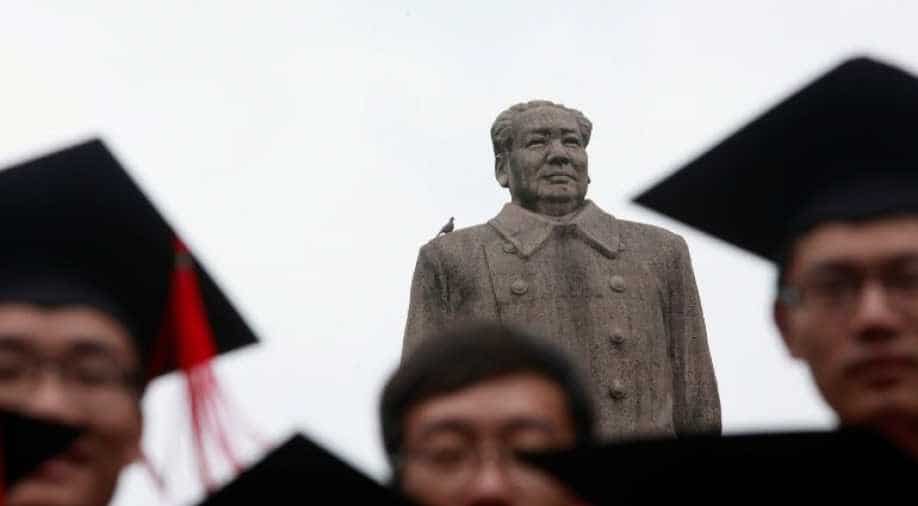 File Photo: Graduates pose for a picture in front of the statue of late Chinese leader Mao Zedong after their graduation ceremony at Fudan University in Shanghai Photograph:( Reuters )

Changes to the charter of one of China's top universities that dropped the phrase "freedom of thought" and added a pledge to follow the Communist Party's leadership have sparked heated debate and a rare act of student defiance.

The changes to the charter of Fudan University in Shanghai, considered one of China's more liberal institutions, came to light on Tuesday when the education ministry said it had approved alterations for three universities.

Within hours, the Fudan amendments were trending on the Weibo social media platform with one hashtag viewed more than a million times.

"If I may dare to ask those who initiated the amendment of the Fudan University charter, how do you expect our generation of Fudan people to face our ancestors," said one Weibo user.

But that post and many similar ones questioning the changes - in particular, the removal of the phrase "freedom of thought" - was deleted by Wednesday afternoon, although the issue was being discussed in private WeChat groups.

Since Communist Party leader Xi Jinping came to power in 2012, China has tightened controls on the internet and civil society in a campaign that has seen increasing censorship and shrinking space for dissent, including on campuses.

Xi has also sought to boost the party's role and deepen its influence across society.

A video circulating on Twitter on Wednesday afternoon showed a group of Fudan University students singing their college anthem, which includes the phrase "freedom of thought", during their lunch break.

Students there confirmed to Reuters that the event had taken place.

Calls to Fudan University's press department on Wednesday to seek comment went unanswered. The Ministry of Education did not immediately respond to a faxed request for comment.

Late on Wednesday, the 114-year-old university posted a statement on social media saying the charter alterations had been made "in strict accordance with legal procedures".

It also noted, however, that the school would continue to have the same anthem. The song, composed in 1925, includes the phrase "academic independence and freedom of thought".

The party has kept an eagle eye on campuses to nip would-be dissent in the bud since university students led pro-democracy protests centred on Beijing's Tiananmen Square in 1989.

Still, some commentators on Weibo noted how the amendments pointed to an expansion of Communist Party control, with the revised charter saying that Fudan's "party committee is the core of the university" and would be responsible for setting its direction and making major decisions.

The new charter said the university would "weaponise the minds of teachers and students using Xi Jinping’s socialist ideology with characteristics of China in the new era”.

The two other universities that made changes to their charters were Shaanxi Normal University and Nanjing University, according to documents published by the Ministry of Education, which showed that it had approved the changes on Dec. 2

Their revised charters similarly included references to strengthening the leadership of the Communist Party at the universities.