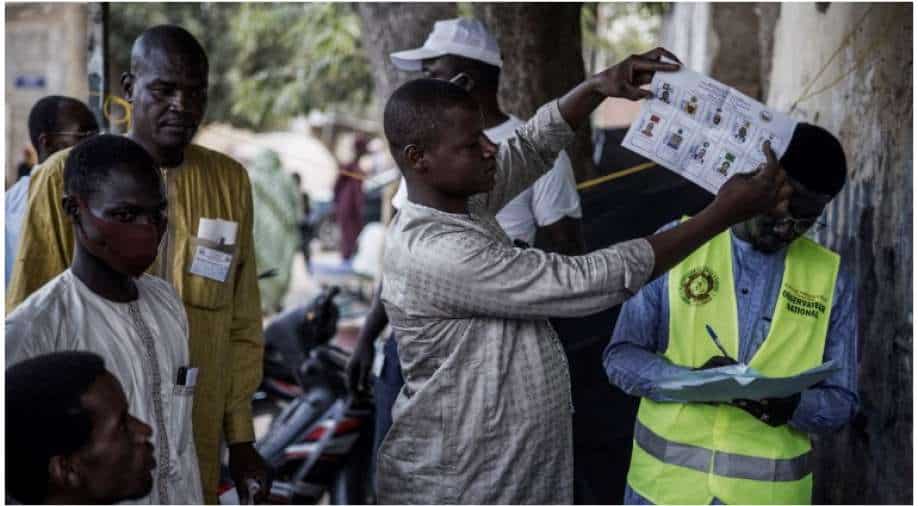 Ballots are counted after the closing of the voting operations at a roadside voting station in N'djamena, on April 11, 2021. Photograph:( AFP )

A key ally in the West's anti-jihadist campaign in the Sahel, Deby, 68, is the frontrunner in a six-candidate race without major rivals and after a campaign in which demonstrations were banned or dispersed

A key ally in the West's anti-jihadist campaign in the Sahel, Deby, 68, is the frontrunner in a six-candidate race without major rivals and after a campaign in which demonstrations were banned or dispersed.

The main question seems to be over turnout, after some members of the opposition called for a boycott of the election.

Speaking to journalists earlier Sunday as he cast his vote at a central polling station in the capital N'Djamena, Deby called "upon all men and women of Chad wherever they are to come out in force and vote".

There was a strong police and army presence across the city, while a lack of voting materials delayed opening at many polling stations visited by AFP.

Queueing to vote in the capital, a 25-year-old saleswoman named Bernadette told AFP she backed Deby because "thanks to him I am free to walk wherever I want, day or night, in total security".

In N'Djamena's Moursal district, seen as an opposition stronghold, one election official said they had had "only three voters since opening", standing beside a near-empty ballot box.

Apart from police and soldiers, the streets of N'Djamena were almost  empty Sunday. One AFP journalist visited 10 voting stations in the capital mid-afternoon and failed to find a single voter.

"I don't vote, there's no candidate for me," said Mugabe, a motorbike taxi driver who said he scrapes by on the equivalent of three to five euros ($3.50-6.00) per day.

"Whether or not we vote, Deby will stay in power, so there's no point," he added.

By Sunday evening, voting stations had closed and counting was underway. Provisional results from the elections are scheduled for April 25, with the final results due on May 15.

Chad has struggled with poverty and instability since gaining independence from France in 1960.
A former rebel and career soldier who seized power in a coup in 1990, Deby has twice, with French help, thwarted attempts to oust him.

Other candidates include Albert Pahimi Padacke, a former prime minister under Deby, and Felix Nialbe Romadoumngar -- officially "leader of the opposition" as his URD party has eight seats in the National Assembly.

But the Supreme Court rejected seven other candidates and three withdrew, including longtime opposition politician Saleh Kebzabo, who quit in protest over violence by the security forces.

Deby has campaigned on a promise of peace and security in a region that has been rocked by jihadist insurgencies. On Sunday, the government said two soldiers had been killed in a Thursday ambush in the Lake Chad region.

Some 7.3 million people are eligible to vote out of a population of 15 million, but the most critical opposition parties have urged voters to boycott the election.

Weekly protest marches urging a peaceful transfer of power have been banned or forcefully dispersed, while police and soldiers carried out a deadly raid at the home of a prominent would-be candidate, Yaya Dillo Djerou, in February.

Human Rights Watch, Amnesty International and UN Secretary General Antonio Guterres are among those who have voiced criticism.

The United States on Thursday urged Chad's election supervisors and courts "to ensure these elections are conducted freely, fairly, and transparently".

"We'll be watching in the days ahead," US State Department spokesman Ned Price warned.

Deby has also benefited, once again, from divisions and weaknesses within opposition ranks.

Kelma Manatouma, a Chad expert at the University of Paris-Nanterre, said that "with the considerable means Deby has mobilised, it is certain he will win."

Chad has been an oil producer since 2003, but it remains deeply poor.

In 2018, 42 percent of the population lived below the poverty line, according to the World Bank. In 2020, Chad ranked 187th out of 189 countries on the UN's Human Development Index.