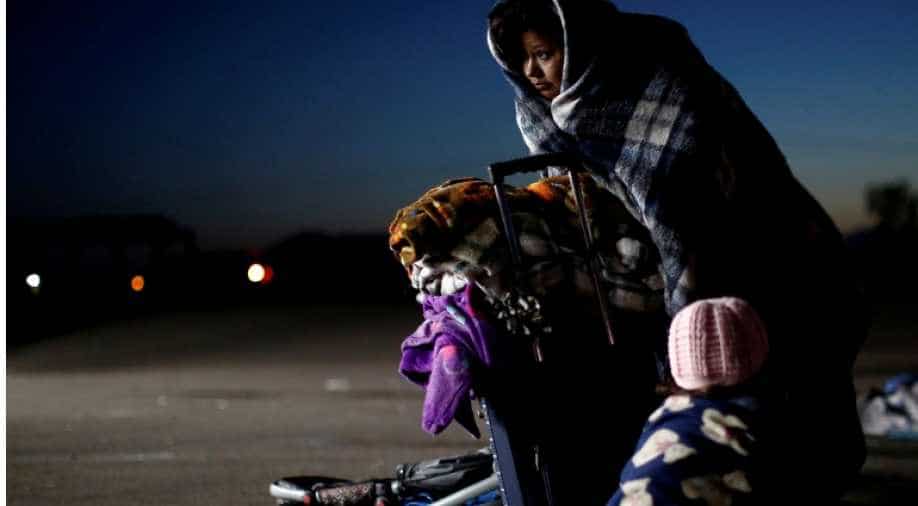 The Mexican government last week reiterated job offers to the migrants, saying that those who obtained legal status could occupy thousands of vacancies, most of them in the country's 'maquiladoras,' doing factory work.

Hundreds of migrants from a caravan of Central Americans were stalled at the US-Mexico border on Saturday, where a handful said they welcomed recent Mexican offers of employment in the face of a hostile US reception.

The Mexican government last week reiterated job offers to the migrants, saying that those who obtained legal status could occupy thousands of vacancies, most of them in the country's "maquiladoras," doing factory work.

Since arriving at the border last week, they have been denied entry through the gates linking Mexico to the United States.

Dozens of the mostly Hondurans waited in lines to bathe and washed clothes sullied from 2,600 miles of relentless travel.

Several members of the caravan, which left the crime-wracked city of San Pedro Sula, Honduras, on October 13, told Reuters they would be willing to stay put in Mexico rather than face rejection across the border.

"If we had work, we would stay. This has been very tiring," said Orbelina Orellana, a 26-year-old Honduran mother of three, waiting at the Alfa and Omega shelter in the city of Mexicali, which borders Calexico, California.

"I cry a lot to not be able to feed them as I'd like," Orellana said of her children. "I just want an opportunity."

Briefly stalled by Mexican riot police on a highway crossing between two southern Mexican states late last month, a dozen migrants told Reuters they rejected such offers, preferring to try their luck in the United States.

But on Saturday, some said that thinking had changed.

"We had the idea to cross to the United States, but they told us it will be nearly impossible," said Mayra Gonzalez, 32, traveling with her two children. "We cannot starve as we wait to find out if they'll give us asylum. Better to work, by the grace of God, here in Mexico."

In a sharp reversal of longstanding US policy, President Donald Trump's administration last week began enforcing new rules that curtail asylum rights for anyone who arrives without documents at the US border.

Trump earlier this month deployed almost 6,000 troops along the long US border with Mexico.

As they wound north through Mexico, the migrants were helped along by local authorities and residents who offered food, clothing and even free rides on daily treks that averaged 30 miles a day, much of it on foot.

But that welcome became noticeably frostier as the caravan reached the border.

In Tijuana, a city long accustomed to a population of migrants in transit, deportees and US pleasure-seekers, a clutch of local residents last week threw rocks at the migrants, telling them to go home.

But some said the Central Americans could help boost the local economy.

"We are not against migration," Ulises Araiza, President of the Association of Human Resources of Industry in Tijuana, told Reuters.

"We know the situation that these people face in their country. But we also favour order so as to integrate them into the labour sector, because only in Tijuana do we have a demand in the maquiladora industry for 5,000 people."