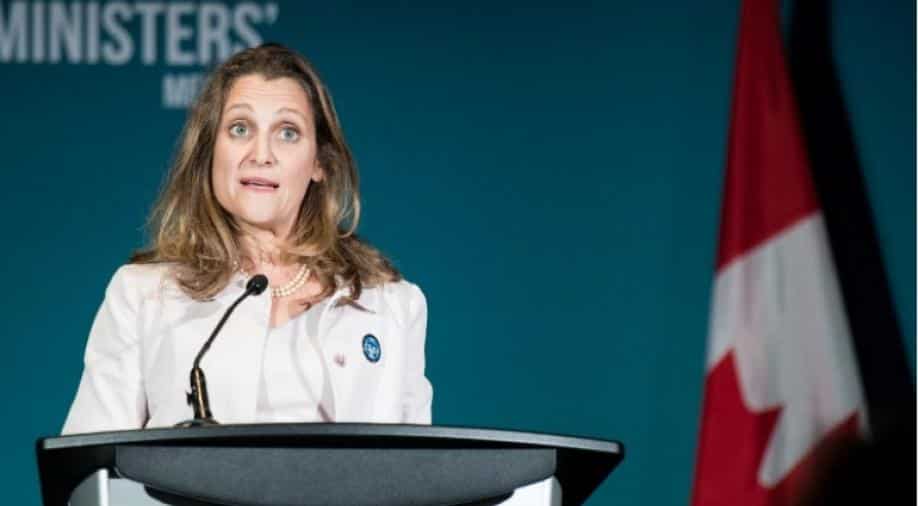 Freeland said the two ministers 'committed to continued discussions,' but she gave few details about their conversation.

Canadian Foreign Minister Chrystia Freeland said on Friday she met her Chinese counterpart, Wang Yi, to discuss tensions following Canada's December arrest of a Huawei Technologies Co executive on a US warrant, and the subsequent detention of two Canadians by China.

"The fact that we were able to speak and discuss these issues face-to-face, directly with one another, absolutely is a positive step," Freeland said in a teleconference from Bangkok, where she was attending an annual East Asia summit.

Freeland said the two ministers "committed to continued discussions," but she gave few details about their conversation.

"Our relationship with China is complicated at the moment, and I am convinced ... that the surest route to a successful outcome is for us not to be negotiating in public," she added.

It was the first encounter between the two since Canada detained Huawei Chief Financial Officer Meng Wanzhou - the daughter of the Chinese company's founder - in December. Beijing is demanding her return.

She is facing possible extradition to the United States to face charges that she conspired to defraud global banks about Huawei's relationship with a company operating in Iran.

US President Donald Trump said in December that he was willing to intervene in the Justice Department's case against Meng if it would serve national security interests or help close a trade deal with China.

After Meng was picked up in Vancouver, China detained Canadians Michael Spavor and Michael Kovrig and later charged them with spying.

Freeland said she expressed Canada's concerns over the two men, "who have been arbitrarily detained in China."

The diplomatic dispute has intensified in recent months and is a nagging problem for Liberal Prime Minister Justin Trudeau, who faces a tight race for re-election in October.

Trudeau, who spoke briefly to Chinese President Xi Jinping on the sidelines of a G20 summit in Japan in June, has faced repeated attacks from Conservative leader Andrew Scheer, his main rival, over his handling of the affair.

On Friday, Scheer said Freeland's meeting with her Chinese counterpart was "a very basic step" and "the government has done nothing" since the men were detained at the start of the year.

"Canadian families, Canadian workers, Canadian farmers, and Canadian job-creators are paying the price for your weak leadership," Scheer wrote in a letter to Trudeau last month, calling on the government to take tough countermeasures, including examining retaliatory tariffs.