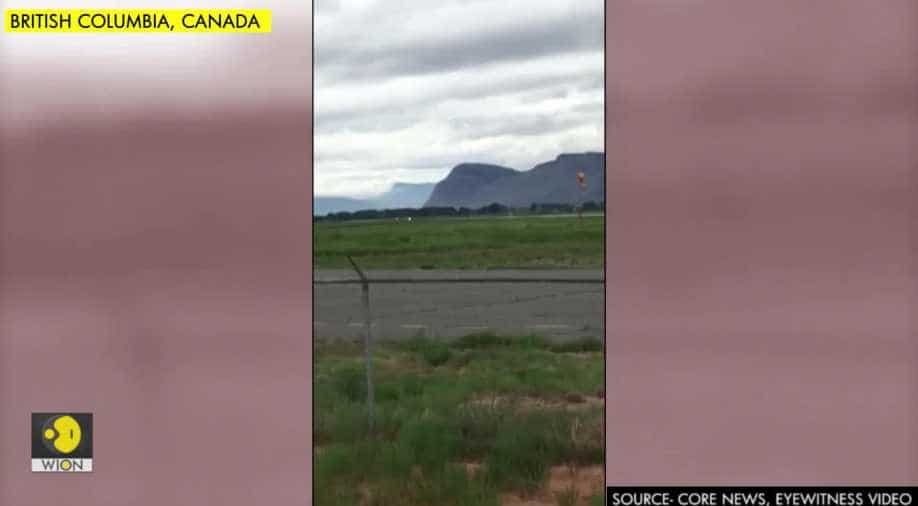 A jet from the Canadian air force's Snowbirds aerobatics team that was on a tour to lift spirits during the coronavirus outbreak crashed in Kamloops, British Columbia, on Sunday (May 17), killing one crew member and seriously injuring the other, defense officials said. Video shot by a witness showed two of the team's Canadair Tutor single-engine aircraft taking off. One of the planes reared up almost immediately before plunging to the ground, exploding just after the pilot ejected.

The two planes were scheduled to fly over British Columbia as part of a tour dubbed 'Operation Inspiration', launched earlier this month to pay tribute to Canadians' efforts to battle the coronavirus pandemic.

A sad incident took place in Canada on Sunday, as a plane from Canada's Snowbirds, an elite air force aerobatics team, crashed in British Columbia during a performance to salute the COVID-19 warriors.

The performance was to thank the frontline workers and public for the efforts against the coronavirus, the military said.

According to local media, the plane crashed into the front yard of a house shortly after taking off from Kamloops Airport on Sunday morning along with one other plane.

Provincial Health Minister Adrian Dix stated that one person has been admitted to the hospital.

"The #RCAF has been made aware that a Canadian Forces Snowbirds aircraft crashed in the vicinity of Kamloops, BC. "Our priority at this time is determining the status of our personnel and supporting emergency personnel," the Royal Canadian Air Force tweeted, without giving further details.

Witnesses said the pilot managed to eject from the plane with a parachute before the crash. Local media reportes state that he landed on the roof of a house, and has suffered back and neck injuries.

A part of the house was on fire, and the pictures emerging from locals showed debris infront of the house. "It was complete chaos. People were yelling and screaming. We thought we were getting bombed or something. That's how hectic it was," a local man, next to whose house the plane crashed, was quoted by local media news network.

The two planes were scheduled to fly over British Columbia as part of a tour dubbed "Operation Inspiration," launched earlier this month to pay tribute to Canadians' efforts to battle the coronavirus pandemic.

The Snowbirds' signature nine-jet formation, with trailing white smoke, began its tour in Nova Scotia and was to perform aerial displays over cities from the Atlantic to the Pacific oceans, at elevations as low as 500 feet (150 meters).