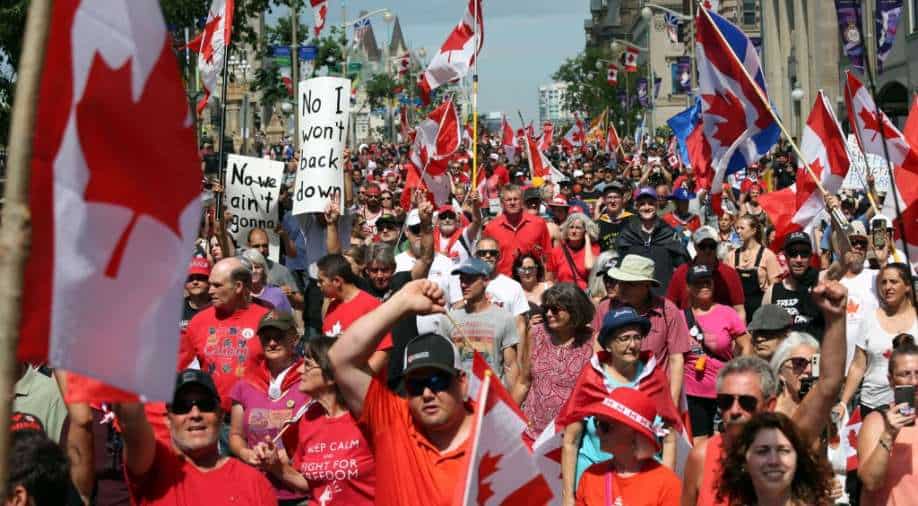 The ‘Freedom Convoy’ and ‘Rolling Thunder’ protesters, who staged a massive demonstration and blockades in Canada against the Covid vaccine mandates and restrictions earlier this year, returned to mark the first-in person Canada Day since the pandemic.

The protesters congregated in Vancouver to celebrate the country’s 155th birthday on Friday. Many of them clad in red and white and waving the maple leaf flag, flocked to the downtown waterfront near Canada Place.

The whole procession was rocked with chaos, with disruptive truck horns blaring at all hours. Some businesses closed temporarily to protect staff from agitators who had latched on to the protest, according to local media reports.

The first “clash” between authorities and “freedom” protesters occurred mid-afternoon when city officials tried to penalise the protesters who had set up a table on Wellington Street to sell freedom merchandise.

The “freedom convoy” supporters grew louder as the day progressed. They clashed with photographers who were trying to take their photos, chanted “freedom” and someone drew “wake up Canada” in chalk on the street, according to the Vancouver Sun newspaper.

Speaking to thousands from a festival stage at LeBreton Flats Park near Parliament Hill, the prime minister acknowledged the tension by focusing on the Canadian flag and its adoption by far-right groups as a symbol of anti-government rage.

“Let’s remember the values that it stands for: Compassion, hope and responsibility, justice, openness and hard work,” Trudeau said.