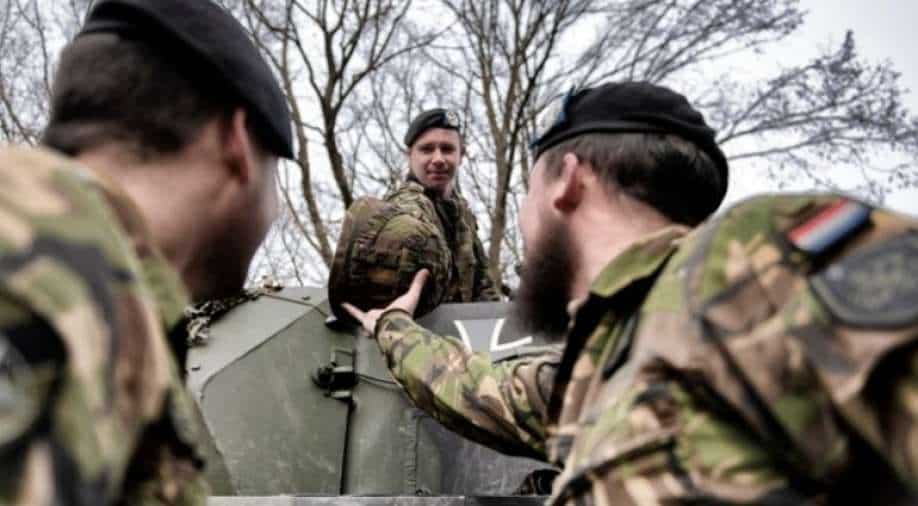 FILE — Troops from a European tank battalion that consists of Dutch and German soldiers prepare for an exercise near Oldenburg in northern Germany on Feb. 4, 2019. Analysts say the European Union is heading for a period of prolonged uncertainty and potential weakness, if not necessarily drift. (Laetitia Vancon ©️ 2021 The New York Times) Photograph:( The New York Times )

Macron will need German help. While France and Germany together can no longer run the European Union by themselves, when they agree, they tend to bring the rest of the bloc along with them

After Germans vote Sunday and a new government is formed, Chancellor Angela Merkel will leave office after 16 years as the dominant figure in European politics. It is the moment that French President Emmanuel Macron has been waiting for.

The German chancellor, although credited for navigating multiple crises, was long criticized for lacking strategic vision. Macron, whose more swaggering style has sometimes ruffled his European partners — and Washington — has put forward ideas for a more independent and integrated Europe, better able to act in its own defense and its own interests.

But as the Anglo-American “betrayal” in the Australian submarine affair has underscored, Macron sometimes possesses ambitions beyond his reach. Despite the vacuum Merkel leaves, a Macron era is unlikely to be born.

Instead, analysts say, the European Union is heading for a period of prolonged uncertainty and potential weakness, if not necessarily drift. No one figure — not even Macron or a new German chancellor — will be as influential as Merkel was at her strongest: an authoritative, well-briefed leader who quietly managed compromise and built consensus among a long list of louder and more ideological colleagues.

That raises the prospect of paralysis or of Europe muddling through its challenges — on what to do about an increasingly indifferent America, on China and Russia, and on trade and technology — or even of a more dangerous fracturing of the bloc’s always tentative unity.

And it will mean that Macron, who is up for reelection in April and absorbed in that uncertain campaign, will need to wait for a German government that may not be in place until January or longer, and then work closely with a weaker German chancellor.

“We’ll have a weak German chancellor on top of a larger, less unified coalition,” said Mujtaba Rahman, managing director for Europe of the Eurasia Group, a political risk consultancy. “A weaker chancellor is less capable of exerting influence in Europe, and then with the Macron election, the political cycles of these two key countries will not be in sync.”

The uncertainty is likely to last until after the French parliamentary elections in June — and that is presuming Macron wins.

Macron has argued forcefully that Europe must do more to protect its own interests in a world where China is rising and the United States is focusing on Asia. His officials are already trying to prepare the ground on some key issues, looking forward to January, when France takes over the rotating EU presidency. But given the likelihood of lengthy coalition talks in Germany, the window for accomplishment is narrow.

Macron will need German help. While France and Germany together can no longer run the European Union by themselves, when they agree, they tend to bring the rest of the bloc along with them.

So building a relationship with the new German chancellor, even a weaker one, will be a primary goal for Macron. He must be careful, noted Daniela Schwarzer, executive director for Europe and Eurasia of the Open Societies Foundations, not to scare off the Germans.

“Macron’s leadership is disruptive, and the German style is to change institutions incrementally,” she said. “Both sides will need to think through how they make it possible for the other side to answer constructively.”

French officials understand that substantive change will be slow, and they will want to build on initiatives already underway, like the analysis of Europe’s interests called “the strategic compass” and a modest but steady increase in military spending on new capabilities through the new European Defense Fund and a program called Pesco, intended to promote joint projects and European interoperability.

After the humiliation of the scuttled submarine deal, when Australia suddenly canceled a contract with France and chose a deal with Britain and the United States instead, many of his European colleagues are more likely now to agree with Macron that Europe must be less dependent on Washington and spend at least a little more in its own defense.

Few in Europe, though, want to permanently damage ties with the Americans and NATO.

“Italy wants a stronger Europe, OK, but in NATO — we’re not on the French page on that,” said Marta Dassu, a former Italian deputy foreign minister and director of European affairs at the Aspen Institute.

Italian Prime Minister Mario Draghi, whose voice is respected in Brussels, believes strongly in the trans-Atlantic relationship, Dassu said, adding, “We’re closer to Germany than to France, but without all the ambiguities on Russia and China.”

France also wants to become more assertive using the economic and financial tools Europe already has, especially trade and technology, the officials say. The point, they say, is not to push too hard too fast, but to raise the European game vis-à-vis China and the United States, and try to encourage a culture that is comfortable with power.

But France’s German partners will be going through a period of uncertainty and transition. A new German chancellor is expected to win only one-quarter of the vote and may need to negotiate a coalition agreement among three political parties. That is expected to take at least until Christmas, if not longer.

The new chancellor will also need to get up to speed on European issues, which barely surfaced in the campaign, and build credibility as the newcomer among 26 other leaders.

“So it’s important now to start thinking of concrete French-German wins during a French presidency that Macron can use in a positive way in his campaign,” Schwarzer said. “Because Berlin does not want to ponder a scenario in which Macron loses” to far-right Marine Le Pen or in which euroskeptics like Matteo Salvini take over in Italy.

Whoever wins, German policy toward Europe will remain roughly the same from a country deeply committed to EU ideals, cautious and wanting to preserve stability and unity. The real question is whether any European leader can be the cohesive force Merkel was — and if not, what it will mean for the continent’s future.

“Merkel herself was important in keeping the EU together,” said Ulrich Speck of the German Marshall Fund. “She kept in mind the interests of so many in Europe, especially Central Europe but also Italy, so that everyone could be kept on board.”

Merkel saw the European Union as the core of her policy, said a senior European official, who called her the guardian of true EU values, willing to bend to keep the bloc together, as evidenced by her support for collective debt, previously a German red line, to fund the coronavirus recovery fund.

“Merkel acted as mediator when there have been a lot of centrifugal forces weakening Europe,” said Thomas Kleine-Brockhoff, head of the Berlin office of the German Marshall Fund. “It’s less clear how the next chancellor will position himself or herself and Germany.”

Still, Mark Leonard, director of the European Council on Foreign Relations, noted that “whoever is the chancellor, Germany is still responsible for more than half of Chinese trade with Europe.” Germany is “vastly more important than the other countries on all the big issues, from how to handle China to the tech wars and climate change,” he said.

That means Macron “knows he has to channel German power behind his vision,” he said.

But French and Italian positions will be crucial, too, on important pending financial issues like fiscal and banking integration, trying to complete the single market and monitoring the pandemic recovery fund.

Merkel’s departure may provide an opportunity for the kinds of change Macron desires, even if in vastly scaled-down version. Merkel’s love of the status quo, some analysts argue, was anachronistic at a time when Europe faces so many challenges.

Perhaps most important is the looming debate about whether to alter Europe’s spending rules, which in practical terms means getting agreement from countries to spend more on everything, from defense to climate.

The real problem is that fundamental change would require a treaty change, said Guntram Wolff, director of Bruegel, a Brussels research institution. “You can’t have fiscal and defense integration by stealth,” he said. “It won’t have legitimacy and won’t be accepted by citizens.”

But the German election debates ignored these broad issues, he said.

“The sad news,” Wolff said, “is that none of the three chancellor candidates campaigned on any of this, so my baseline expectation is continued muddling forward.”