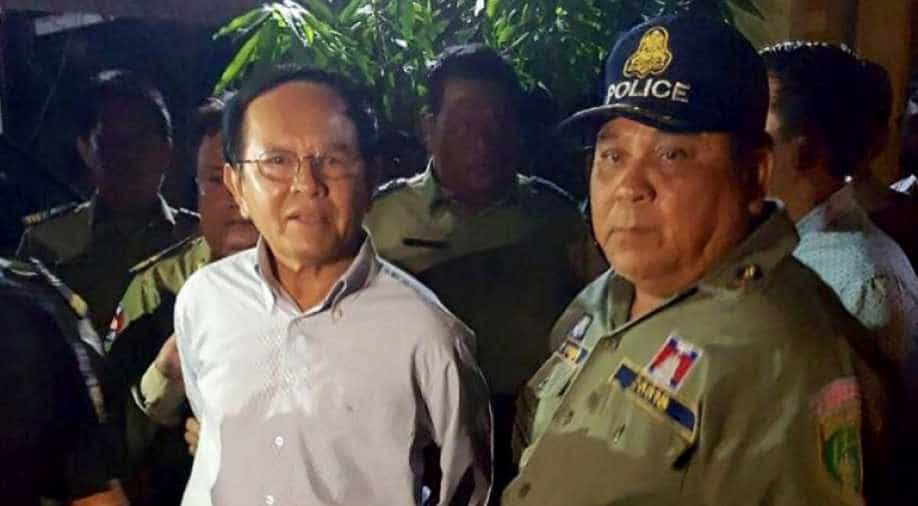 Kem Sokha was arrested in 2017 and accused of plotting to overthrow the government of strongman Hun Sen, who has ruled since 1985.

Cambodia has freed a prominent opposition figure from house arrest more than two years after he was charged with treason, a court spokesperson told AFP on Sunday, after attempts by his colleagues to return to the country were thwarted.

Kem Sokha was arrested in 2017 and accused of plotting to overthrow the government of strongman Hun Sen, who has ruled since 1985.

He was sent to a remote prison, then confined to his house and the surrounding block and prohibited from talking to the media.

Sokha is the co-founder of the banned Cambodia National Rescue Party, which was dissolved ahead of elections swept by Hun Sen last year.

Pheng Heng, a lawyer for Kem Sokha, confirmed that some restrictions were lifted but said the ban on politics was too broadly worded and unclear.

The decision comes as Sokha's political partner Sam Rainsy is waylaid in Malaysia with other CNRP officials after attempting a highly-publicised comeback on November 9, Cambodia's independence day.

Rainsy, who has lived in France since 2015 to avoid jail for convictions he says are politically motivated, had promised a dramatic return.

But after being barred in Paris on Thursday from getting on a flight to Thailand, Rainsy boarded a plane a day later and arrived in Kuala Lumpur.

It is unclear how he will get back to the country and for now he plans to meet with Malaysian MPs this week.

He did not immediately respond to a request for comment on Sokha.

Dozens of activists have been rounded up in recent weeks in Cambodia, while Hun Sen has called on fellow members of the Association of Southeast Asian Nations (ASEAN) to arrest Rainsy in what the strongman has described as an attempted coup.

But Hun Sen is also under international pressure to ease restrictions on dissent as the European Union considers revoking a duty-free tariff scheme for Cambodia's lucrative garment sector.

ASEAN Parliamentarians for Human Rights board member and former Philippines MP Teddy Baguilat called the court ruling misleading and an attempt to ward off sanction.

"This is just another cynical move by Hun Sen to try and hoodwink the international community", he said.