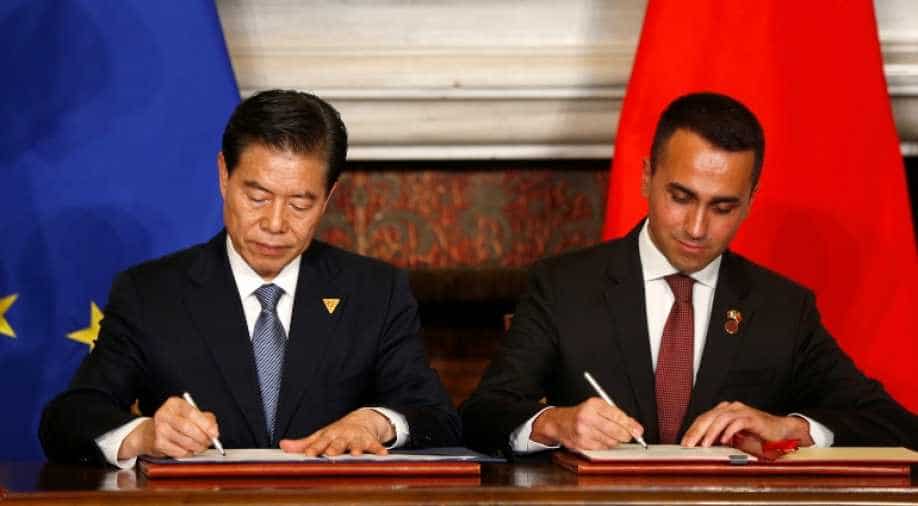 Italy on Saturday became the first G7 country to sign up for Beijing's new "Silk Road" project of a road, rail and sea transport and trade links stretching from Asia to Europe.

Italy's participation in China's giant "Silk Road" infrastructure project sparked an outcry in Germany on Sunday, including a call for the European Union to block such deals with a veto.

"The expansion of transport links between Europe and Asia is in itself a good thing -- as long as the autonomy and sovereignty of Europe is not endangered," the EU's budget commissioner, Gunther Oettinger, told the Funke newspaper group.

But the German commissioner said he viewed "with concern that in Italy and other European countries, the infrastructure of strategic importance like power networks, rapid rail lines or harbours are no longer in European but in Chinese hands."

"Europe urgently needs a China strategy, that lives up to its name," he added.

Noting that EU member states were sometimes not adequately taking into account national and European interests, Oettinger suggested that " European veto right, or a requirement of European consent -- exercised by the Commission -- could be worth considering."

Oettinger's call came after German Foreign Minister Heiko Maas had sharp words for Rome over its deal with Beijing.

"In a world with giants like China, Russia or our partners in the United States, we can only survive if we are united as the EU," Maas told Welt is Sonntag newspaper.

"And if some countries believe that they can do clever business with the Chinese, then they will be surprised when they wake up and find themselves dependent.

"China is not a liberal democracy," he stressed.

Europe has been struggling to find a coherent strategy to deal with China. While the continent desperately needs to keep China on its side as a trade ally, it is also wary of the Chinese state's ambitions and growing global clout.

Italy on Saturday became the first G7 country to sign up for Beijing's new "Silk Road" project of a road, rail and sea transport and trade links stretching from Asia to Europe.

The project has raised eyebrows in Washington and in some EU capitals where critics say it will give China too much sway.

China's President Xi Jinping has said it would be a two-way street of investment and trade.

Following his visit to Italy, Xi stopped in Monaco on the French Riviera Sunday before meeting later in the evening with France's Emmanuel Macron.