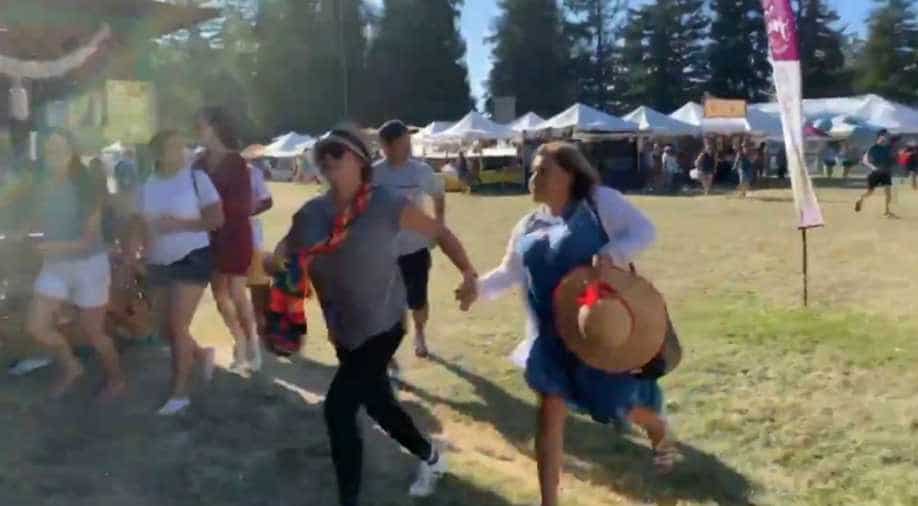 People run for cover as an active shooter was reported at the Gilroy Garlic Festival, south of San Jose, California, on July 28. At least three people have been killed in the incident. (Courtesy: Twitter/@wavyia) Photograph:( Others )

Police said witnesses reported a second gunman may have been involved which the police were investigating.

Police said the suspected gunman involved in the Gilroy food festival shooting at California was shot and killed.

Authorities said at least four people were killed with several injured in the shooting on Sunday evening. Reports said that the casualty toll could be higher.

Also See: First pics from the scene of California shooting

"It is believed that the shooter cut through the fence to gain access to the festival," Gilroy police chief Scot Smithee said, adding that police engaged with the gunman in less than a minute after gunshots were heard.

Police said witnesses reported a "second gunman" may have been involved which was being investigated. People were seen running for cover after gunshots rang out amid the confusion at the food festival.

NBC News had reported that a white man in his 30s carried out the shooting with a rifle, however, authorities still haven't confirmed the identity of the shooter.

Founded in 1979, the Gilroy Garlic Festival features food, drink, live entertainment and cooking competitions. It says it is hosted by volunteers and describes itself as the world’s greatest summer food festival.

The festival was being held at outdoor Christmas Hill Park where the shooting took place. Meanwhile, US President Donald Trump in a tweet said: "Be careful and safe!"

Law Enforcement is at the scene of shootings in Gilroy, California. Reports are that shooter has not yet been apprehended. Be careful and safe!