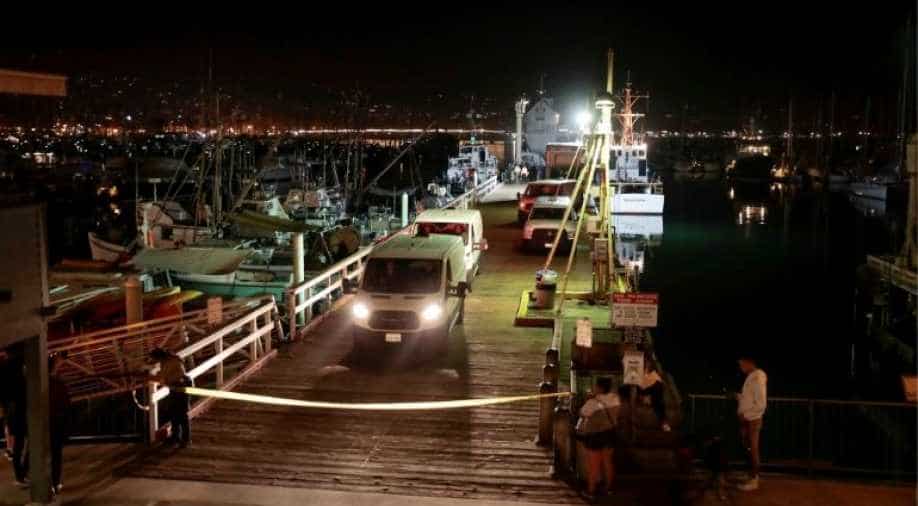 Vans carry the victims of a pre-dawn fire that sank a commercial diving boat  Photograph:( Reuters )

The disclosure raises questions over whether crew members, who told investigators they tried desperately to rescue the passengers in their below-decks sleeping quarters, were already too late to save them by the time they were alerted to the blaze.

The 34 people killed when a dive boat caught fire and sank off the California coast likely died from smoke inhalation and may have been dead before flames consumed their bunk area, the local sheriff said on Friday.

The disclosure raises questions over whether crew members, who told investigators they tried desperately to rescue the passengers in their below-decks sleeping quarters, were already too late to save them by the time they were alerted to the blaze.

Divers have so far recovered the burned remains of 33 victims, Santa Barbara County Sheriff Bill Brown told a news conference. Crews hoped to find the final body when the 75-foot (23-meter) Conception was raised from the floor of the Pacific Ocean as early as Friday.

"We will continue working tenaciously to recover all the victims, to determine how they died and investigate the cause of this terrible fire and loss of life with the hope that future such tragedies can be prevented," Brown said.

The Conception erupted in flames at about 3:15 am (1015 GMT) on Monday off Santa Cruz Island, killing 33 passengers and a crew member in one of California’s worst maritime disasters.

The five surviving crew members, who were above deck when the fire broke out, have told investigators the flames kept them from climbing down a narrow ladder into the bunk room or gaining access through a window.

A coroner's pathologist was "convinced" the victims died due to smoke inhalation, Brown said, but his analysis was considered preliminary pending toxicology tests.

The sheriff stopped short of saying the findings meant the crew's efforts would have been too late to save the victims, cautioning that more investigation was required.

Officials have decided against conducting autopsies on the victims, a move aimed at more quickly releasing the remains to family members, some of whom had travelled to California from as far away as India.

The coroner's office has identified 18 of the recovered bodies and officials released the names of nine victims, saying the rest awaited notifications of next of kin, who have been asked to provide DNA samples.

The FBI had been assisting in contacting loved ones of the dead. One victim's mother was notified in Japan and another family was found in Singapore, Brown said.

The passengers had signed up for a three-day scuba diving trip aboard the Conception and were sleeping below deck along with one crew member when the fire erupted. That crew member, who perished in the accident, was identified on Friday as 26-year-old Alexandra Kurtz.

The owner of the dive ship, Truth Aquatics, filed a petition in US District Court in Los Angeles on Thursday seeking to avoid liability in the incident by invoking a 19th-century law that has been used in such disasters as the 1915 sinking of the Titanic.

That action appears to be pre-emptive as no lawsuits have yet been filed against Truth Aquatics over the accident.

The Los Angeles Times, citing unnamed sources, reported that investigators had already found safety issues on the Conception, including the lack of a night watchman who was assigned to be on duty while the rest of the crew and passengers were sleeping.

Officials declined to comment on that report at the news briefing, but US Coast Guard Captain Monica Rochester confirmed that a night watchman or "rover" was stipulated by the boat's inspection certificate.

The Conception, which rests upside down on the ocean floor some 65 feet (20 meters) below the surface, could be raised as early as Friday depending on weather conditions, Rochester said