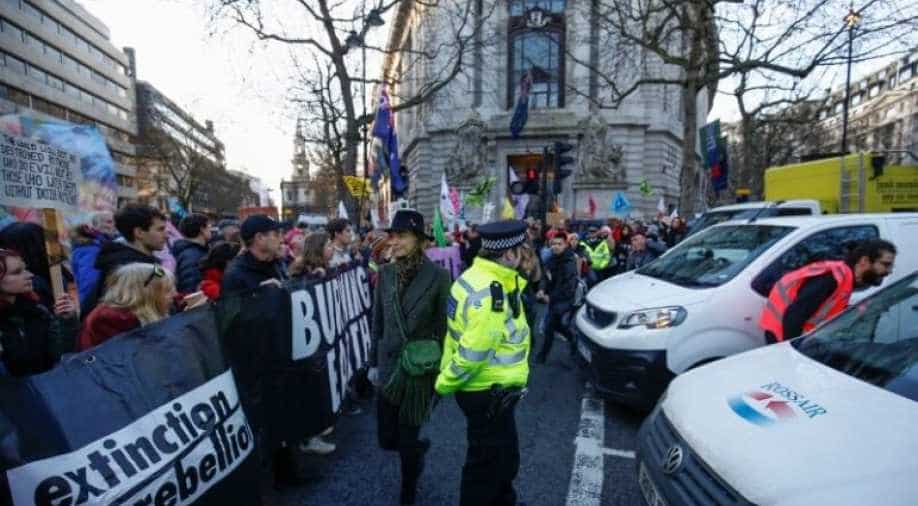 Police officer stands guard during a demonstration against the Australian government's inaction over climate change despite the bushfires crisis, outside the Australian Embassy in London, Britain, January 10, 2020 Photograph:( Reuters )

Extension Rebellion, a series of protests against climate change have been labelled as a ''key threat'' by a police force in London. The decision was made based on counter-terrorism assessment mechanisms that allegedly led to ''intelligence tip-offs'', The Guardian reported.

In their report, which was forwarded to the City of London Corporation, the police force's performance was measured in terms of how they have countered terrorist activity.

The report said, ''The force has continued close liaison (which has included the dissemination of intelligence) with partners and pan-London agencies regarding the key threats, particularly with regard to far-right organisations and Extinction Rebellion.''

“CTSAs (counter-terrorism security advisers) have delivered Action Counter Terrorism (ACT) awareness training across the City, including bespoke presentations to organisations. This has resulted in an increase in intelligence being submitted to the force by ACT-trained security personnel”, the report additionally said. 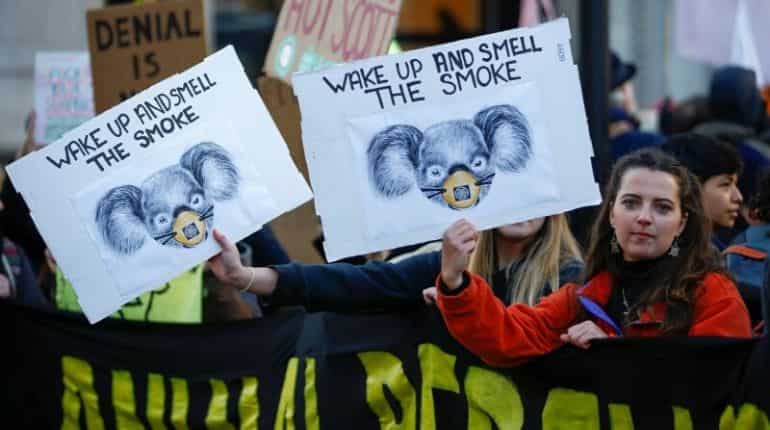 Image: Protesters hold banners as they demonstrate against the Australian government's inaction over climate change despite the bushfires crisis, outside the Australian Embassy in London, Britain, January 10, 2020 | Reuters

This is not the first time the report has come up. In June last year, it was discussed at one of the hearings for scrutiny, ''The key issues continue to be threats relating to international terrorism and domestic terrorism. In addition, the high-profile actions of Extinction Rebellion, which centred around non-violent disobedience, result in some disruption in the City, with the potential for the event to be hijacked or infiltrated by more extremist groups''.

Paul Stephens, an Extinction Rebellion member and former Metropolitan police detective sergeant, told The Guardian, ''The categorisation of Extinction Rebellion with terrorist groups looks more like a strategy to encourage intelligence gathering than an error and is in complete contradiction to the words of counter-terrorism policing. It is an obvious and unethical tactic which could lose the trust of valued sources''.

“We will never knowingly mislead the police, so why not speak to us directly? I hope that the gravity of this emergency and the need for communication and cooperation is understood”, Stephens added.

This was followed by a statement from a spokesperson for London Police: ''City of London Police does not consider Extinction Rebellion to be a terrorist organisation. Ahead of the protests in the summer, our officers, who have regular contact with businesses in the area, spoke to them to ask them to consider the impact of the protests on their business continuity, and to make plans accordingly''. 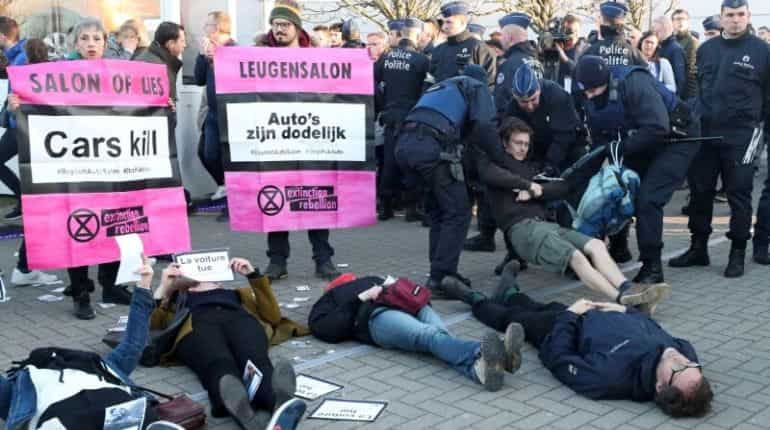 Image: Demonstrators lie in a street during a protest of the climate action group Extinction Rebellion at Brussels Motor Show in Brussels, Belgium January 18, 2020 | Reuters

Earlier this month, The Guardian had reported that Extinction Rebellion was put on a list of extremist ideologies. This implies that people are required to report related activity to the authorities.

More information released last week claimed that Greenpeace and PETA were also included in a counter-terrorism police document, as part of anti-extremism briefings.

A police chief referred to this as an “error of judgment” and promised to recall the inclusion of such organisations in the list.