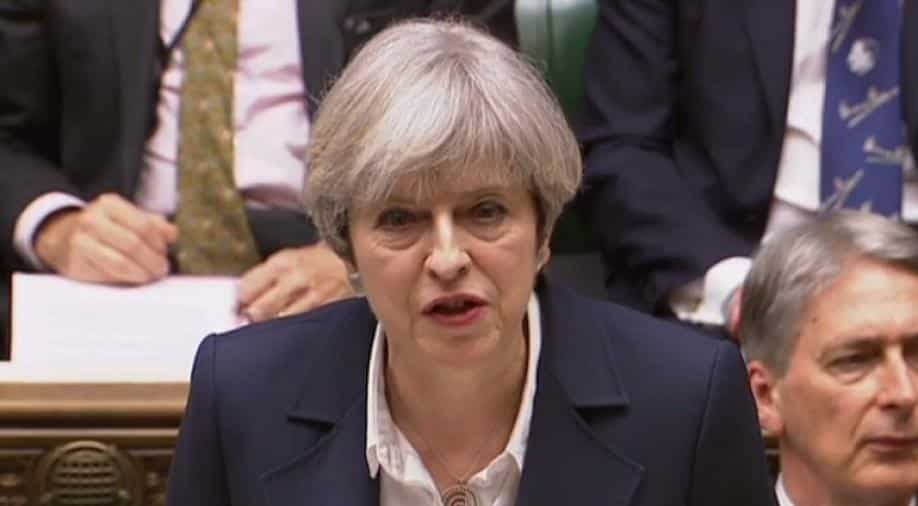 Theresa May said Britain would never enter into a process of sovereignty negotiations with which Gibraltar was not comfortable. Photograph:( AFP )

British Prime Minister Theresa May on Sunday insisted that she would "never" allow Gibraltar to slip from British control against the wishes of Gibraltarians as the issue took centre-stage in early Brexit wranglings.

May told Chief Minister of Gibraltar Fabian Picardo that "we will never enter into arrangements under which the people of Gibraltar would pass under the sovereignty of another state against their freely and democratically expressed wishes."

Her comments came as Spain pledged it would not close its border post-Brexit with the 6.7-square-kilometre (2.6-square-mile) British overseas territory on the southern tip of Spain.

On matters of trade, the European Union has said that Spain would have to agree to extend any deal between the bloc and Britain to also cover Gibraltar.

This means that Madrid could potentially block Gibraltar's access to any trade deal, and politicians in "the Rock" fear that Madrid will use the veto to seek sovereignty over the peninsula.

May told Picardo that she would never "enter into a process of sovereignty negotiations with which Gibraltar is not content," according to a readout of the phone call released by her Downing Street office.

"The UK remains steadfastly committed to our support for Gibraltar, its people and its economy," it added.

"We remain absolutely dedicated to working with Gibraltar for the best possible outcome on Brexit, and will continue to involve them fully in the process."

British foreign minister Boris Johnson earlier Sunday stressed that the territory "will not be bargained away".

"Gibraltar is not for sale. Gibraltar cannot be traded. Gibraltar will not be bargained away," Johnson wrote in the Sunday Telegraph.

Johnson wrote that the policy of the government "remains fixed and firm. The sovereignty of Gibraltar cannot be changed without the express consent of the UK and the people of Gibraltar."

"The status of Gibraltar has been unchanged since 1713. It made no difference when the UK joined the Common Market in 1973 and when Spain was not yet a member. It should make no difference today."

'No intention' to close border with Gibraltar: Spain

The peninsula is home to about 33,000 people, with a key electronic gambling industry and offshore finance sector that deals with the whole of Europe.

Spain said Sunday it had no post-Brexit plans to close its border with the territory, which depends on the crossing for much of its supplies and visitor flow.

Some 10,000 people also make the crossing to work daily from the Spanish region that surrounds Gibraltar called Campo de Gibraltar, and they fear that Madrid may make things more difficult at the frontier.

"There is no intention to close the border. The idea is that Spaniards who live in the Campo de Gibraltar and who work in Gibraltar continue to do so," Spanish Foreign Minister Alfonso Dastis said in an interview published in daily newspaper El Pais.

Picardo on Friday hit out at the EU proposal, branding it "unnecessary" and "discriminatory."

"This is a disgraceful attempt by Spain to manipulate the European Council for its own, narrow, political interests," Picardo said in a statement.

Gibraltarians want to stay British, as demonstrated in 2002 when they rejected a referendum on shared sovereignty with Spain.