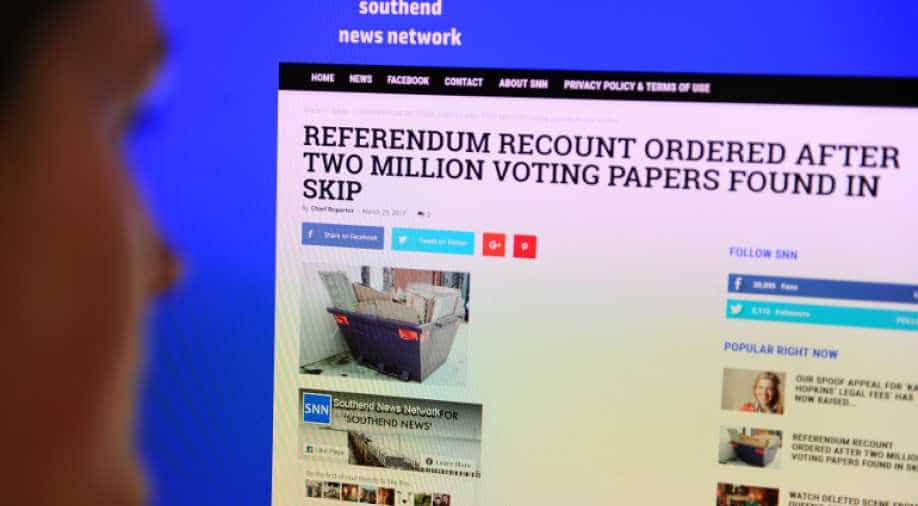 A journalist reads a satirical fake news story on the Southend News Network website in London. Photograph:(AFP)
Follow Us

The rise of fake news has been a hot topic in Britain this year, with the lawmaker leading a probe into the phenomenon warning it was "a threat to democracy".

As-well as the inquiry, British journalism schools have begun to adapt their teaching while national broadcaster the BBC has issued prevention guidelines for children in an attempt to reverse the trend.

Damian Collins, head of the parliamentary probe, told AFP that fake news undermined trust in the media in general, with the explosion of social media making political issues particularly sensitive.

Fake news represents "a threat to democracy...if people are deliberately using it on social media platforms to spread misinformation around an election", he said.

The panel is considering whether fake news spreaders could be blocked or closed down, or genuine news outlets given a special verification mark.

But the tech giants had only moved "in response to pressure, and reluctantly", the MP warned.The impact on those too young to vote is also causing concern.

Fake news is not a 21st-century phenomenon, but what is new is its scale, said James Rodgers, a senior lecturer in journalism at the City University of London.

"Before, being published relied on getting into an established medium. It no longer does," said Rodgers, whose university runs some of Britain's most prestigious journalism courses.

The former BBC and Reuters journalist said three main factors seem to create the conditions for a fake news surge.

"These spikes seem to occur at times of political uncertainty, armed conflict and new technology. We have all of those three at the moment," he told AFP.

Rodgers said that as people got wiser to the ways of social media, they would grow more discerning and that journalists would become more adept at utilising technology.In Britain, there is a fine tradition of humorous spoof news.

It reaches a crescendo on April 1, April Fools' Day, when newspapers and broadcasters traditionally try to catch their audience out.

A Daily Express piece saying that the EU was to demand the recall of every British number plate following Brexit provoked anger amongst readers, with one commenter writing "the EU can shove their dumb number plates where the sun don't shine."

A fake news producer explained that, as demonstrated by the Express report, the key to getting stories to go viral was to appeal to people's emotion.

In his mid-30s, he works in the teaching industry and does not reveal his identity due to threats of violence from angry readers in his native Southend, east of London.

"The EU referendum was my busiest-ever time. It was such a twitchy subject, people were just going with it," he told AFP.
A story about then prime minister David Cameron telling Southend supermarket shoppers he would ignore the referendum result if Britain voted out was viewed more than 400,000 times.

"People were getting outraged, saying, 'I knew he was going to do this!'," the spoofer said.

"They will literally read a headline and the first paragraph and share it without thinking."

However, he said there was a serious underlying message.

"I'm encouraging people to either take fake news at face value as entertainment, or teach people that fake news is something that should be analysed before sharing," he said.

"Everyone who's against stupidity on the internet would appreciate what I do."