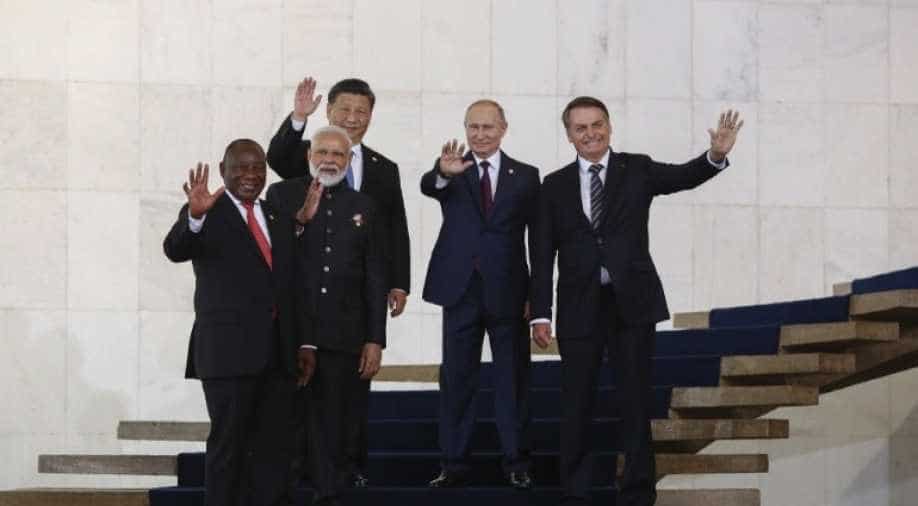 The document presents a shared vision of the BRICS nations on such issues as a reform of the system of international relations, strengthening of international financial and economic architecture, future cooperation between the five countries

The BRICS nations, including Brazil, Russia, India, China, and South Africa, on Thursday, reaffirmed their fundamental commitment to mutual respect and share the goal of building a peaceful, stable and a prosperous world.

The document presents a shared vision of the BRICS nations on such issues as a reform of the system of international relations, strengthening of international financial and economic architecture, future cooperation between the five countries.

"Building on the work of successive summits in the pillars of economy, peace and security and people-to-people exchanges, we will continue to strengthen BRICS cooperation for the benefit and welfare of our peoples and enhance the traditional ties of friendship amongst our countries," the document said.

It also emphasised the need for a constructive dialogue and cooperation on conserving biodiversity, prohibiting the use of chemical weapons, anti-money laundering and terror financing, infrastructure, including the G20 infrastructure agenda, the New Development Bank`s Project Preparation Facility, counter-terrorism, security in the use of ICTs, major international and regional hot spots, peacekeeping and transnational organised crime.

"Guided by the international framework in places, such as the relevant UN resolutions, the Madrid principles and the Arab Peace Initiative, we reiterate that the two-state solution will enable Israelis and Palestinians to live side by side, in peace and security," they said in the document. "In this context, we express, furthermore, the need for new and creative diplomatic efforts to achieving a just and comprehensive settlement of the Palestinian-Israeli conflict, in order to achieve peace and stability in the Middle East," the leaders noted.

The leaders also expressed serious concern about the ongoing crisis in the Gulf region and reiterated continuous support to the people of Afghanistan in their effort to build a stable, inclusive, peaceful and prosperous country.

"We firmly believe that there is no military solution to the situation in Afghanistan. We reaffirm our support for a process of peace and reconciliation that is Afghan-owned and Afghan-led. We express concern over the persistence of terrorist-related attacks," the document read.

The theme of the BRICS summit this year was `Economic Growth for an Innovative Future` and therefore, keeping in tandem with it, the countries highlighted the importance of science, technology and innovation (STI) as one of the main drivers of economic growth as well as a key element to shape the future of societies.

The member countries also led to the foundation of the BRICS Network of Human Milk Banks and emphasised the importance of our collective action in promoting research and development of medicines and diagnostic tools to end epidemics, to combat communicable diseases and to facilitate access to safe, effective, quality and affordable essential medicines, as well as activities to strengthen non-communicable diseases prevention.

Terrorism was another important point of focus at the summit. The leaders once again vowed their commitment to fighting terror and agreed to maintain efforts on anti-corruption law enforcement cooperation and returning of assets, including on civil and administrative proceedings.