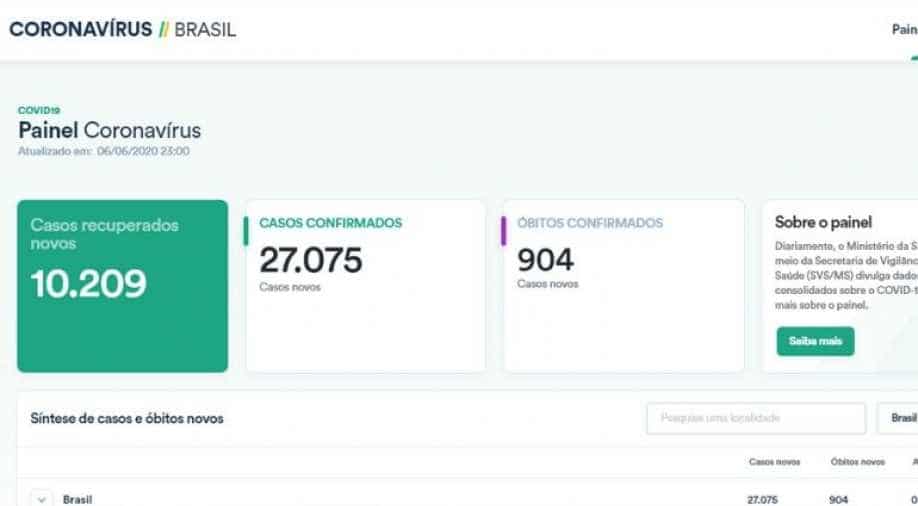 The official website, covid.saude.gov.br, was taken down on Friday for few hours and was made active again on Saturday. However, the website on Saturday saw a new layout and saw changed figures.

Brazil has been the centre of criticism for few weeks now due to the country's rising number of coronavirus cases, and the poor response from President Jair Bolsonaro.

'Another day, another controversy' became real in Brazil, as the country removed months of COVID-19 related data from public view on Saturday.

"The cumulative data ... does not reflect the moment the country is in," Bolsonaro said on Twitter, citing a note from the ministry. "Other actions are underway to improve the reporting of cases and confirmation of diagnoses."

Brazil has the second-highest number of coronavirus cases, and the number has been rising rapidly, as the Brazilian President still calls it "just a flu".

Brazil, since the beginning of the pandemic, had been maintaining a website with the cumulative data, divided by state and municipality.

However, on Saturday, the country's Health Ministry removed the data and also stopped giving a total count of confirmed cases and the death toll.

The official website, covid.saude.gov.br, was taken down on Friday for few hours and was made active again on Saturday. However, the website on Saturday saw a new layout and saw changed figures.

The revised website only showed a fraction of the data, reflecting only deaths, cases and recoveries within the last 24 hours.

Bolsonaro had gained criticism for actively undermining the critical condition of the country. He has been infamous for changing the Health Minister frequently, ignoring advice from health experts, and being irregular in daily coronavirus-related updates. He has also been recently accused of trying to silence the media.

The Brazilian government, last week, changed the time of its daily coronavirus update from 5pm to 10pm, which gained a lot of criticism from the local media. However, Bolsonaro tweeted on Saturday that a later daily update would "avoid undernotification and inconsistencies."