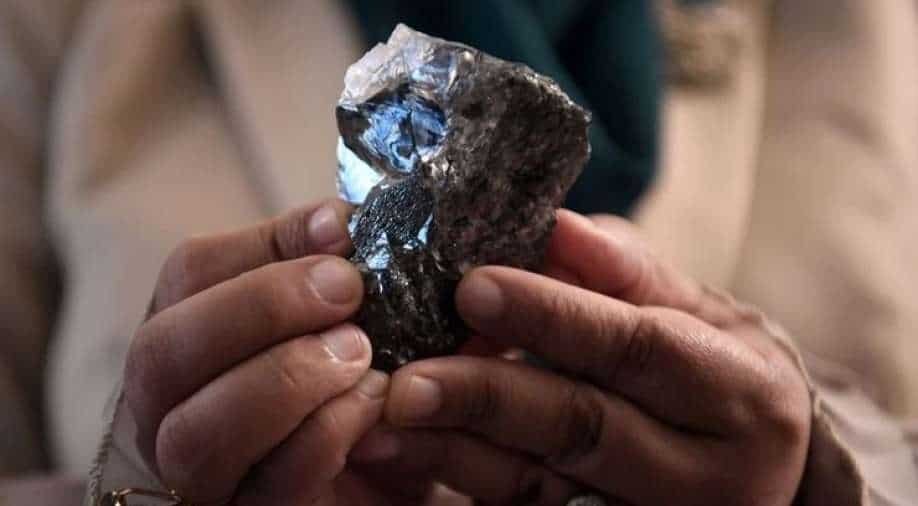 A member of the Botswana cabinet holds a 1,174-carat diamond in Gaborone, Botswana. Photograph:( Reuters )

The latest find, which fills the palm of a man's hand, was discovered on June 12 by Canadian Diamond firm, Lucara. The precious stone was presented to Botswana's cabinet in the capital Gaborone on Wednesday.

An exceptionally large and white 1,174-carat diamond stone has been unearthed in Botswana, a mining company announced on Wednesday, trumping another huge precious stone found in the country last month.

The latest find, which fills the palm of a man's hand, was discovered on June 12 by Canadian Diamond firm, Lucara and presented to the country's cabinet in the capital Gaborone on Wednesday.

"This is history in the making, for us and Botswana as well," said the company's managing director Naseem Lahri, adding that the diamond sits in third position among the world's largest gemstones.

In terms of size of large stones, "it actually sits as number three in the hierarchy," Lahri told AFP.

Last month Botswanan diamond firm Debswana said it had recovered the "third largest" stone in the world at 1,098-carats on June 1.

The latest find solidifies Botswana as a leader on the world stage of the largest stones, accounting for six in the top ten list.

The biggest diamond ever discovered in the world was the 3,106-carat Cullinan, found in South Africa in 1905. Parts of that diamond adorn the British crown jewels.

President Mokgweetsi Masisi on Wednesday welcomed the "riveting moment" and the growing frequency of diamond discoveries in the country -- promising that the southern African country will have a long-lasting legacy.