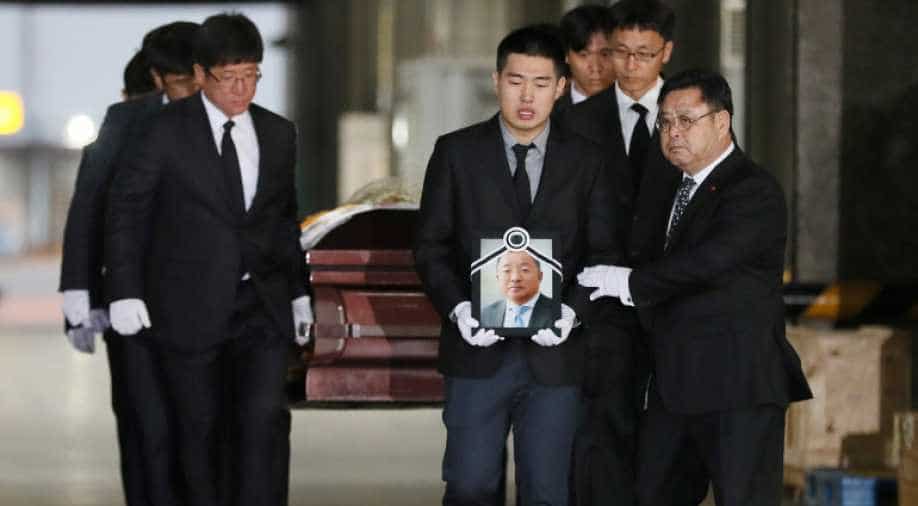 Their bodies and those of four Nepali guides were retrieved from the remote location in the Dhaulagiri mountain range on Sunday.

The bodies of five South Korean climbers killed at the Himalayas in one of Nepal's deadliest mountaineering accidents of recent years were returned home on Wednesday.

The South Koreans, led by one of the country's top climbers Kim Chang-ho, were on the rarely summited Mount Gurja last week when their camp was hit by a sudden, powerful gust most probably caused by a downblast from an avalanche.

Their bodies and those of four Nepali guides were retrieved from the remote location in the Dhaulagiri mountain range on Sunday.

Bereaved families and friends wailed or watched tearfully as the five coffins were unloaded from a plane at South Korea's Incheon airport early Wednesday.

"All mountaineers are grieving, thinking of all the beautiful memories we shared with the victims," Lee In-jung, head of the Union of Asian Alpine Association, told reporters.

"The living cannot speak to the dead," Lee said, wiping away tears.

A joint funeral for the five will be held on Friday.

Kim, 49, was the fastest person in the world to summit the world's 14 highest mountains without using supplemental oxygen -- in seven years, 10 months and six days.

The accident was Nepal's worst since 2015, when a powerful earthquake triggered an avalanche that killed 18 people at Mount Everest's base camp.

Mount Gurja, which was last summited in 1996, lacks the level of infrastructure of Everest, where hundreds of people reach the top each year.

Thousands of climbers flock annually to Nepal -- home to eight of the world's 14 highest peaks -- creating a lucrative mountain tourism industry that is a vital source of cash for the poverty-stricken country.