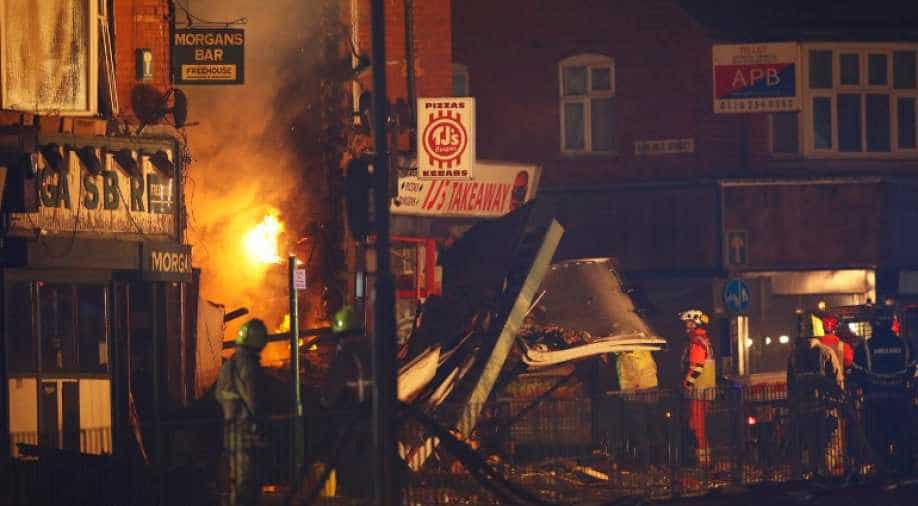 An explosion destroyed a convenience store and a home in the central English city of Leicester on Sunday, injuring at least six people, officials said.

British police said there was no immediate indication that the explosion was linked to terrorism.

Pictures and videos posted on Twitter showed flames leaping into the sky from the site which was reduced to rubble.

"All emergency services are currently dealing with this," the police force said in a statement. "Please avoid the area."

Later it said the blast was being investigated by the fire service. "At this stage, there is no indication this is terrorist-related," Leicestershire police said.

A local hospital said two patients were in a critical condition and four people had less severe injuries.

A photograph published by the Leicester Mercury newspaper showed a blaze and the rubble of a destroyed building which the newspaper said housed a convenience store and a flat above it.

"We heard an absolutely massive explosion. It was pretty frightening," the Mercury quoted an unidentified resident, who lives a few streets away, as saying.

"We went to look out of the upstairs windows and saw loads of smoke, and then a few seconds later massive orange flames."

The city's fire department said it sent six fire engines after the reports of a large explosion and a building collapse.

The Leicester Mercury said debris had been blown across the road in front of the site.

Police said a number of other buildings were damaged and homes and businesses in the area had been evacuated.