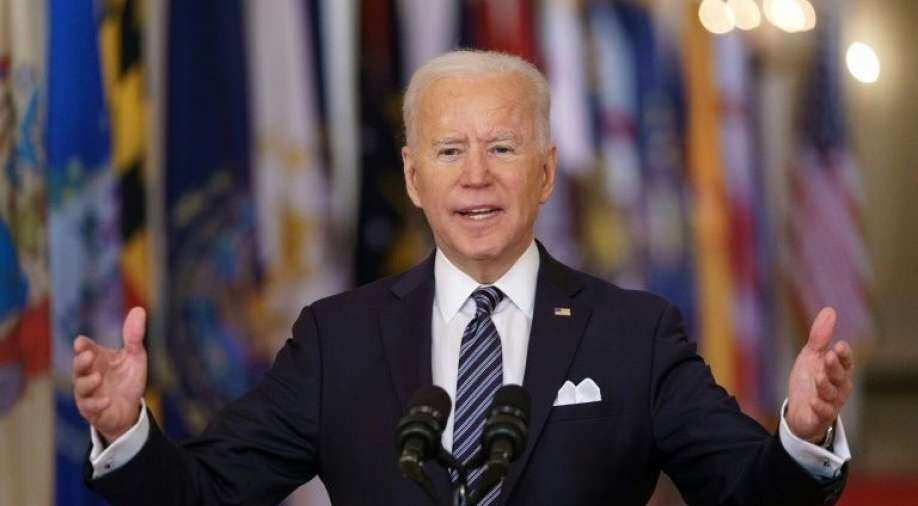 US President Joe Biden has outlined a massive plan to revamp the nation’s infrastructure over the next eight years in what he billed as “a once in a generation investment in America”.

The $2.3 trillion plan to rebuild America's crumbling infrastructure proposes doubling federal funding for mass transit and spending $80 billion to expand and modernise passenger rail service. A key source of the financing would come from increasing the corporate tax rate from 21 per cent to 28 per cent, and cracking down on the use of tax havens to avoid paying US taxes.

Speaking at a carpenters union training center in Pittsburgh, Biden on Wednesday drew comparisons between his hard-hatted proposed transformation of the US economy and the space race.

“It’s not a plan that tinkers around the edges,” Biden said. “It’s a once-in-a-generation investment in America unlike anything we’ve seen or done since we built the interstate highway system and the space race decades ago. In fact, it’s the largest American jobs investment since World War II. It will create millions of jobs, good-paying jobs.”

Biden also vowed to make companies like Amazon pay their fair share in taxes to fund his ambitious $2 trillion infrastructure plan. He said it was not about "retribution" against the wealthy and successful, but the fact that Amazon pays zero in federal taxes is "just wrong."

Biden expressed outrage over the imbalance between taxes paid by the wealthiest corporations and the burden for middle-class workers. He cited a 2019 study showing 91 Fortune 500 companies, "the biggest companies in the world, including Amazon ... pay not a single, solitary penny of federal income tax.

"That is just wrong."

The package already is drawing condemnation from corporations that balk at reversing the tax cuts signed in late 2017 by then-president Donald Trump. That measure slashed the corporate rate from 35 per cent, although with various deductions and loopholes, the average rate companies actually pay was, and remains, much lower.

White House officials say the spending would generate those jobs as the country shifts away from fossil fuels and combats the perils of climate change. It is also an effort to compete with the technology and public investments made by China, which has the world’s second-largest economy and is fast gaining on the United States’ dominant position.

“I’m convinced that if we act now, in 50 years people are going to look back and say this is the moment when America won the future,” Biden said.

Wednesday’s announcement will be followed in coming weeks by Biden pushing a companion bill of roughly equal size for investments in child care, family tax credits and other domestic programmes.

Biden's plan would invest $85 billion in subways, buses and other transportation systems, the plan says, "to modernize existing transit and help agencies expand their systems to meet rider demand," part of a broader push to get more people out of private cars.

"It will ultimately reduce traffic congestion for everyone," the plan says.

The new construction could keep the economy running hot, coming on the heels of Biden’s $1.9 trillion coronavirus relief package. Economists already estimate it could push growth above 6 per cent this year.

Funding for the infrastructure projects would come from a hike on corporate taxes that would aim to raise the necessary piles of money over 15 years and then reduce the deficit going forward. In doing so, Biden would undo the action by Trump and congressional Republicans to lift the corporate tax rate to 28 per cent from the 21 per cent rate set in a 2017 overhaul.

The Biden plan also aims to crack down on tax havens used by multinationals and raise the global minimum tax to boost revenue collection, according to a White House handout.

Other changes include the elimination of subsidies for fossil fuel development and stiffening tax enforcement on large companies.