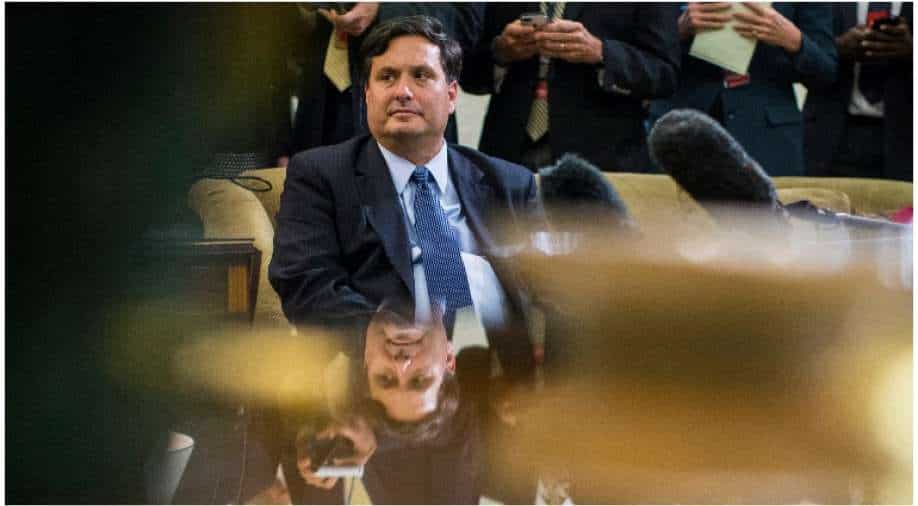 FILE -- Then Ebola Response Coordinator Ron Klain listens to President Barrack Obama during a meeting in the Oval Office of the White House in Washington, Oct. 22, 2014. President-elect Joe Biden will name Ron Klain, a veteran Democratic operative and a decades-long confidant, to be his White House chief of staff as early as Thursday morning, Nov. 12, 2020, according to several people familiar with Biden’s decision. (Jabin Botsford/The New York Times) Photograph:( The New York Times )

Klain, a lawyer with deep experience on Capitol Hill, advising President Barack Obama and in corporate board rooms, served as Biden’s chief of staff when he was vice president and has been seen for months as the likeliest choice to manage his team in the White House

President-elect Joe Biden named Ron Klain, a veteran Democratic operative and a decadeslong confidant, to be his White House chief of staff Wednesday evening, the first step toward putting in place his administration’s senior leadership.

Klain, a lawyer with deep experience on Capitol Hill, advising President Barack Obama and in corporate board rooms, served as Biden’s chief of staff when he was vice president and has been seen for months as the likeliest choice to manage his team in the White House. Known for steady nerves, he also has a fierce wit, which he has frequently unleashed on President Donald Trump on Twitter.

He was particularly critical of Trump’s handling of the coronavirus pandemic, having served as the “Ebola czar” under Obama during an outbreak of the deadly disease in his second term. A video of Klain lecturing Trump about the pandemic was widely seen during the campaign.

In a statement, Biden called Klain an “invaluable” adviser, noting in particular the work they did together during the economic crisis in 2009 and the Ebola outbreak in 2014.

“His deep, varied experience and capacity to work with people all across the political spectrum is precisely what I need in a White House chief of staff as we confront this moment of crisis and bring our country together again,” Biden said.

The choice of Klain, 59, who first went to work for Biden in the late 1980s when Biden was a senator from Delaware and Klain was a recent graduate of Harvard Law School, signals that Biden intends to rely on a tight circle of Washington insiders who have been by his side for years.

Advisers have said that the president-elect will announce other top White House staff in the coming days, even as Trump refuses to accept the results of the election, tweeting “WE WILL WIN!” on Wednesday evening.

Biden is not likely to reveal his Cabinet picks until around Thanksgiving, several people close to the transition said.

As a political tactician, Klain is well versed in the levers of power in both the executive and legislative branches of government. But he will quickly come under pressure to assemble a White House staff that extends beyond the moderate members of the Democratic establishment with whom Biden has surrounded himself over four decades in politics.

Even before Biden’s announcement, liberals in the party had already begun demanding that progressives be given a significant voice in the West Wing. And the president-elect will also be pressed to fulfill his campaign pledge to make his administration “look like the country” by tapping people of color, LGBTQ Americans and other minorities to be part of the White House staff.

In a statement, Klain said he looked forward to assembling “a talented and diverse team to work in the White House as we tackle their ambitious agenda for change and seek to heal the divides in our country.”

Sen. Elizabeth Warren of Massachusetts, one of Biden’s liberal rivals for the presidential nomination, praised Klain on Twitter, calling him “a superb choice” and saying that he “understands the magnitude of the health and economic crisis and he has the experience to lead this next administration through it.”

Biden made his choice of Klain even as Trump remained defiant in the face of political reality, refusing to concede defeat and insisting that the presidential election was stolen from him four days after news organizations projected that Biden had secured the electoral votes necessary to win.

Trump and his allies — including most Republicans on Capitol Hill — have falsely claimed that the election was tainted by fraudulently cast ballots and a conspiracy by Democrats, poll workers and the news media. The president’s lawyers have filed lawsuits in several states and his operatives are scouring for examples of fraud even as Democratic and Republican election officials in nearly all 50 states say the election was fair.

In the meantime, Biden is moving quickly to demonstrate that the president’s unprecedented behavior will not interfere with the transfer of power that will take place on Jan. 20.

Klain clerked for Justice Byron White at the Supreme Court in the late 1980s and has been a fixture by Biden’s side for much of the past 30 years, serving at one point as the chief counsel for the Senate Judiciary Committee, which Biden led.

Klain was Biden’s top legal adviser on the committee during the racially charged and sexually explicit collision with the Bush administration over the confirmation of Clarence Thomas to the Supreme Court. Many of Biden’s allies saw his handling of the confirmation — managed in large part by Klain and his team of committee lawyers — as one of the stains on his record in the Senate.

Klain took a detour to serve as Al Gore’s chief of staff while he was vice president and later oversaw Gore’s unsuccessful recount effort in Florida (for which he was portrayed by Kevin Spacey in the HBO film “Recount”).

But Klain has always remained close to Biden. In 2009, he became the vice president’s chief of staff, reprising the role he had played a decade earlier for Gore.

Klain’s experience confronting the Ebola outbreak during the Obama administration was newly relevant this year as the coronavirus pandemic upended American life and became Biden’s central message during the presidential race.

The Biden campaign leaned on Klain’s expertise as it drew a contrast between the way Biden would approach the pandemic and the way Trump did. In March, the campaign released a video of Klain speaking in front of a white board comparing the two approaches that has been viewed more than 4 million times on Twitter. A sequel, again featuring Klain in front of a white board, was posted in July.

In the last few weeks of the campaign, Trump sought to use Klain’s own words against him with a video in which Klain appears to admit that the Obama administration “did every possible thing wrong” during an outbreak of the H1N1 swine flu virus. Fact checkers concluded that Klain was speaking only about the reliance on a single vaccine, and was taken out of context.

Klain has gone in and out of government over the past several decades, at times practicing as a lawyer and later working with Steve Case, the founder of AOL, in a venture capital investment firm called Revolution. His initial agreement with Case in 2005 included the right to take unpaid leave in September and October every four years to participate in presidential politics.

“He can process a lot of information, focus on the things that matter and balance a lot of balls,” Case said of Klain, calling him “unflappable” and pragmatic when it comes to confronting a challenge: “‘Here’s the problem or the opportunity. Let’s narrow in on what matters and get the right team in place.’”

Case dismissed concerns from some people that Klain was too much of a Washington insider for this moment in history, noting that as an Indiana native, Klain often goes home for the Indianapolis 500.

“He’s been in Washington a long time,” Case said. But he added, “He’s an Indiana guy.”

Over his years mingling among the nation’s top Democratic politicians, Klain has become a specialist in helping presidents win confirmation battles in the Senate. During Obama’s first term, he played a central role in helping win confirmation of Justices Sonia Sotomayor and Elena Kagan to the Supreme Court.

He also developed a reputation as the Democratic Party’s expert on debate preparation, coaching virtually all of the party’s presidential and vice-presidential nominees during the past two decades. He made little secret of his frustration with sitting presidents — including Obama — complaining that they too often refused to prepare.

A memo for his clients that Klain prepared years ago has become memorialized as the party’s best advice for its candidates. Among the 21 rules that he outlined: No. 10, “Punches are good, counterpunches are better”; No. 13, which says that a candidate can lose a debate at any time but that “you can only win it in the first 30 minutes”; and No. 20, which warns not to say something that does not feel right.

“At that moment remember the advice that some elementary schoolteacher once gave you: ‘If in doubt, don’t,’ ” Klain wrote.

Throughout the 2020 campaign, Klain was a top adviser to Biden and was deeply trusted by a candidate known for maintaining a tight-knit inner circle. He was not especially involved in logistical, day-to-day decisions, but along with Anita Dunn, a senior Biden adviser, he played a central role in guiding Biden’s debate preparations and message.

A number of Biden allies have noted Klain’s experience dealing with economic and health crises during the Obama administration, when the country was reeling from the Great Recession. In the 2016 campaign, Klain helped Hillary Clinton prepare for debates, a task he began working on before Biden announced he would not mount his own presidential bid.

“It’s been a little hard for me to play such a role in the Biden demise — and I am definitely dead to them — but I’m glad to be on Team HRC,” Klain wrote to John D. Podesta, Clinton’s campaign chairman, in an October 2015 email that was later disclosed by WikiLeaks. A week after Klain sent the email, Biden announced he would not run for president in 2016.

Klain was also the inaugural guest on a short-lived podcast that Biden hosted this year, speaking about the pandemic. “I’m going to call on you a lot more,” Biden told him at the end of the episode. “You know, I call on you almost every day for non-pod advice.”

At a Biden virtual fundraiser in June for Indiana donors, former Sen. Joe Donnelly made note of Klain’s work on the Ebola outbreak for the Obama White House.

At the virtual event, Klain, it turned out, was not far out of mind for the former vice president. “As a matter of fact, coincidentally, literally five minutes before I walked into this makeshift studio, I was on the phone with Ron Klain,” Biden said.