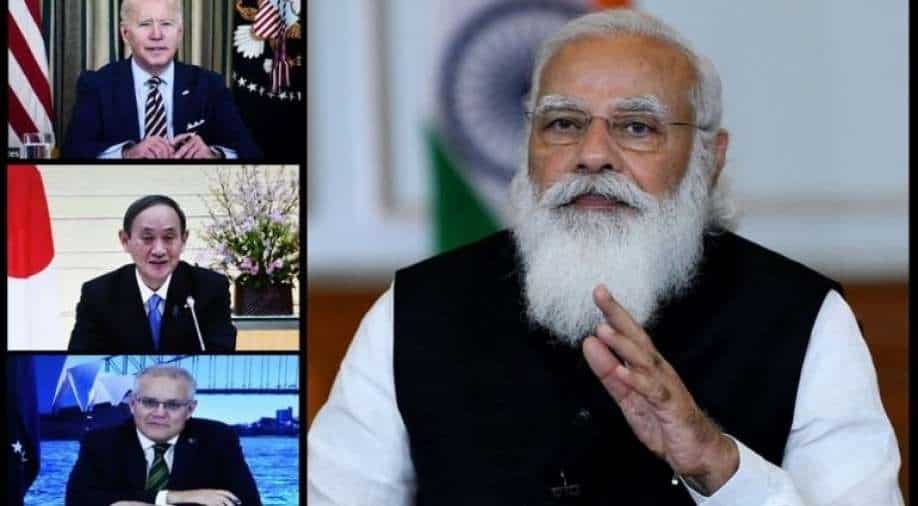 The Quad, a strategic forum comprising India, Japan, Australia and the United States of America, held its first-ever head of states meet virtually on Friday.

The leaders of the Quad countries -- India, Australia, Japan and the United States -- have pledged to work with other countries who share the same goals, and to ensure that Covid vaccines are administered throughout the region till 2022. They also reiterated their commitment to a free and secure Indo-Pacific region.

The Quad, a strategic forum comprising India, Japan, Australia and the United States of America, held its first-ever head of states meet virtually on Friday.

In a jointly-authored opinion article for The Washington Post, US President Joe Biden, Indian Prime Minister Narendra Modi, Australian Prime Minister Scott Morrison and Japanese Prime Minister Yoshihide Suga, wrote that "the Quad" was born in crisis. It became a diplomatic dialogue in 2007 and was reborn in 2017.

“Over the course of these past months, each of us has grieved the suffering that our people and the world have endured. But in this dark hour, our partnership offers a spark of hope to light the path ahead,” the leaders wrote in the joint Op-Ed published in the Washington Post.

"Against this backdrop, we are recommitting to a shared vision for an Indo-Pacific region that is free, open, resilient and inclusive. We are striving to ensure that the Indo-Pacific is accessible and dynamic, governed by international law and bedrock principles such as freedom of navigation and peaceful resolution of disputes and that all countries are able to make their own political choices, free from coercion. In recent years, that vision has increasingly been tested," they added.

The article listed the announcements made on Friday, and much of what appeared in the joint statement and the fact sheet that were released after the summit.

The group also recalled the history of the grouping from being founded in the aftermath of the 2004 Tsunami and being turned into a dialogue in 2007 to being reborn in 2017.

The four leaders said that the trials have only strengthened "our resolve" to reckon with the most urgent of global challenges together.

"To strengthen our quest for a region that is open and free, we have agreed to partner to address the challenges presented by new technologies and collaborate to set the norms and standards that govern the innovations of the future. It is clear that climate change is both a strategic priority and an urgent global challenge, including for the Indo-Pacific region," the leaders' op-ed read further adding that the four countries would work together and with others to strengthen the Paris agreement and enhance the climate actions of all nations.

Launching the "ambitious efforts" to help end the Covid pandemic, the countries pledged "to expand and accelerate production" in India of safe, accessible and effective vaccines.

"We will partner at each stage to ensure that vaccines are administered throughout the Indo-Pacific region into 2022. We will combine our scientific ingenuity, financing, formidable productive capacity and long history of global-health partnership to surge the supply of life-saving vaccines, in close collaboration with multilateral organisations including the World Health Organisation and Covax Facility," the leaders wrote."We will renew and strengthen our partnerships in Southeast Asia, starting with the Association for Southeast Asian Nations, work with the Pacific Islands, and engage the Indian Ocean region to meet this moment.

"The Quad is a flexible group of like-minded partners dedicated to advancing a common vision and to ensuring peace and prosperity. We welcome and will seek opportunities to work with all of those who share in those goals," the article read.

The leaders stated that the four countries' foundations of democracy and a commitment to engagement "unite us".

"We know we can provide for the safety and prosperity of our people at home by confronting global crises together, with purpose and resolve. We summon from tragedy the strength and resilience to unify and overcome. And we recommit ourselves, once again, to an Indo-Pacific region that is free, open, secure and prosperous," the leaders wrote.

China claims much of the South China Sea, but there are also overlapping claims by Brunei, Malaysia, the Philippines, Taiwan, and Vietnam.

China has built bases and other outposts on shoals, reefs and rock outcroppings to deepen its claim over 80 per cent of the 3.6 sq km waterway, with Vietnam, the Philippines, Brunei, Malaysia and Taiwan claim parts of the same area.