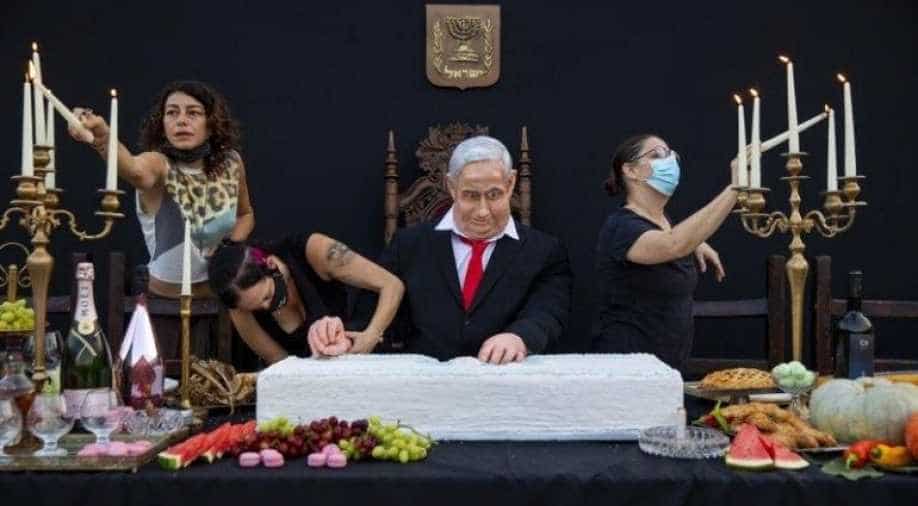 Coronavirus has triggered the country's unemployment to 21 per cent.

A sculpture of Benjamin Netanyahu on a giant cake depicting him in the Last Supper has irked the Israeli Prime Minister. He said that the artwork was equivalent to a death threat.

The cake was made after series of protests have rocked the country for weeks urging Netanyahu to resign. These protests took place due to Netanyahu's botched up coronavirus response, ongoing corruption trial and allegations of an undemocratic power grab to remain in high office.

Coronavirus has triggered the country's unemployment to 21 per cent.

The life-sized artwork includes pink champagne and cigars in connection to one of the three corruption allegations where the Prime Minister allegedly received luxury gifts from two wealthy businessmen.

The artwork inspired by 15th-century Leonardo da Vinci mural, depicts Netanyahu alone at a 10-metre long table, surrounded by candles and a medieval feast of fruits and pastries.

On Wednesday, Benjamin Netanyahu criticised the art-work and called the mural, that depicts Jesus' final meal before he was killed, an equivalent of a death threat.

“There is no room for incitement and threats of murder – explicit and implicit – against me and my family, including the shameful threat of crucifixion today in Tel Aviv,” he said on Twitter.

But artwork creator, Itay Zalait, said that the fake banquet was instead meant to symbolise the last supper for democratic freedoms for Israelis.