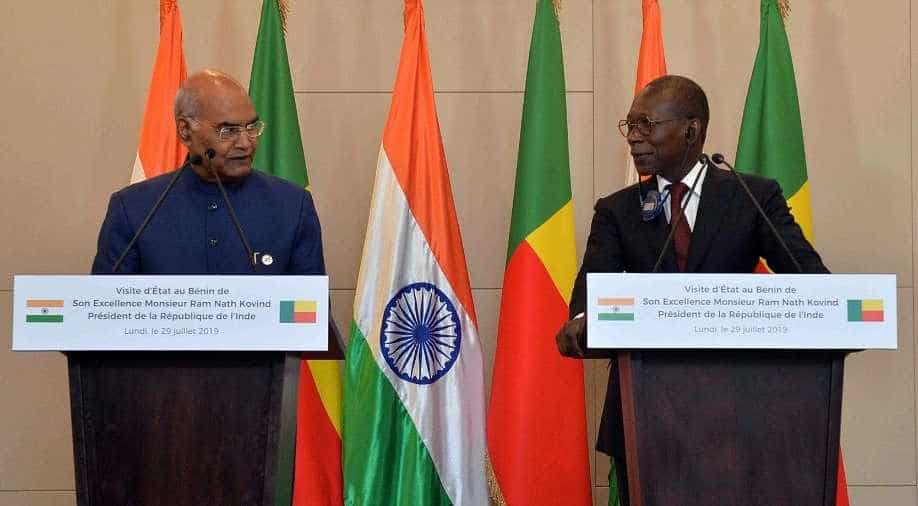 President Ram Nath Kovind along with President of the Republic of Benin Patrice Talon during the press statements at the Presidential Palace of the Marina in Cotonou. Photograph:( Reuters )

Kovind is currently on the first leg of his three-nation tour to Africa, where he reached the Beninese port city of Cotonou on Sunday.

Kovind is currently on the first leg of his three-nation tour to Africa, where he reached the Beninese port city of Cotonou on Sunday. He was accorded a ceremonial welcome by Talon on Monday, following which the two sides held talks.

During the meeting, India offered Benin a fresh line of credit (LOC) amounting to 100 million US dollars to finance development projects in the Western African nation. A string of initiatives was agreed upon by both the sides during the talks.

"To boost our economic partnership, we signed an agreement wherein India will help set up an Export Credit Agency in Benin. I also conveyed our decision to extend e-visa facility to Benin to give a boost to business and people-to-people ties," Kovind said after the meeting.

Several projects financed by Indian assistance are currently underway in Benin, including a project to supply safe drinking water to 103 villages.

The two sides also signed a Country Agreement for Benin to avail India's tele-education programme, e-Vidyabharati, and telemedicine initiative, e-Arogyabharati."Under these programmes, India is extending free tele-education courses to 15,000 students and telemedicine courses to 1,000 doctors and paramedics in Africa. Our training programme offered to Benin in both civilian and defence fields will be expanded as per the requirements of the Beninese side," a Ministry of External Affairs statement quoted Kovind as saying.

Bilateral trade between India and Benin has risen from $350 million to more than $800 million in the last decade.

With this, India has become Benin's largest trading partner.