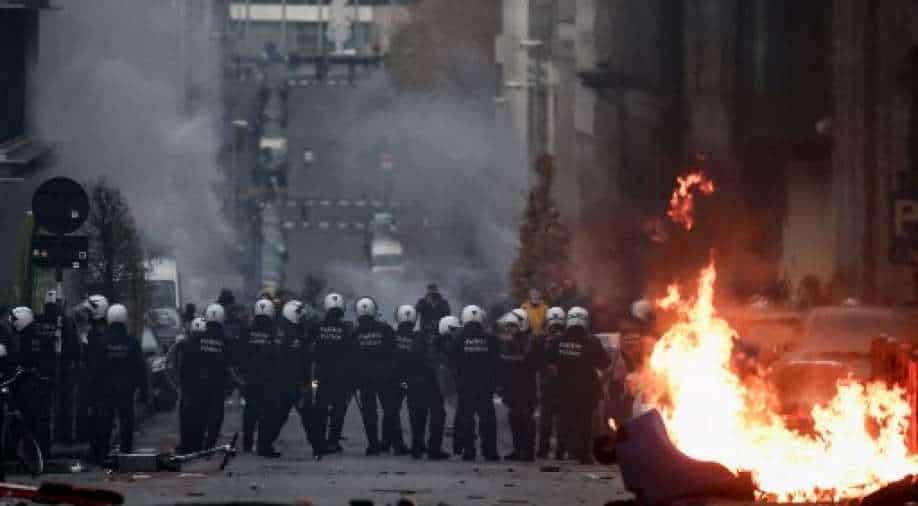 Belgian police used tear gas and water cannons to disperse the crowd who were protesting against new coronavirus measures imposed by the government this week.

After the Netherlands, large scale protests broke out in Brussels on Sunday against COVID-19 restrictions as police used tear gas and water cannons to disperse the crowd.

Riot police was pressed into service as officials claimed at least 35,000 protesters were involved in the rally after the government imposed new coronavirus measures this week.

Watch: Riot breaks out in Netherlands over COVID-19 measures

The Netherlands had witnessed violence for two consecutive nights as police arrested at least 19 people over riots in The Hague. At least five police officers were injured during the violence as rioters went on a rampage.

On Friday, protests against the government's coronavirus measures at Rotterdam turned violent as the country entered into a  partial lockdown. Protests had also taken place in Amsterdam as people shouted "no lockdown".

Also Read: When can the COVID-19 masks finally come off?

The Netherlands has been planning to ban unvaccinated people from bars and restaurants. Europe has witnessed a surge in coronavirus as countries have once again imposed restrictions.

The Austrian government had announced earlier a lockdown to begin from Monday as the government moved to make vaccinations mandatory from February next year.

Protesters also took the streets in Croatia and Denmark against Covid curbs. In Australia, people marched against coronavirus restrictions in Sydney and Melbourne however it was mainly peaceful.