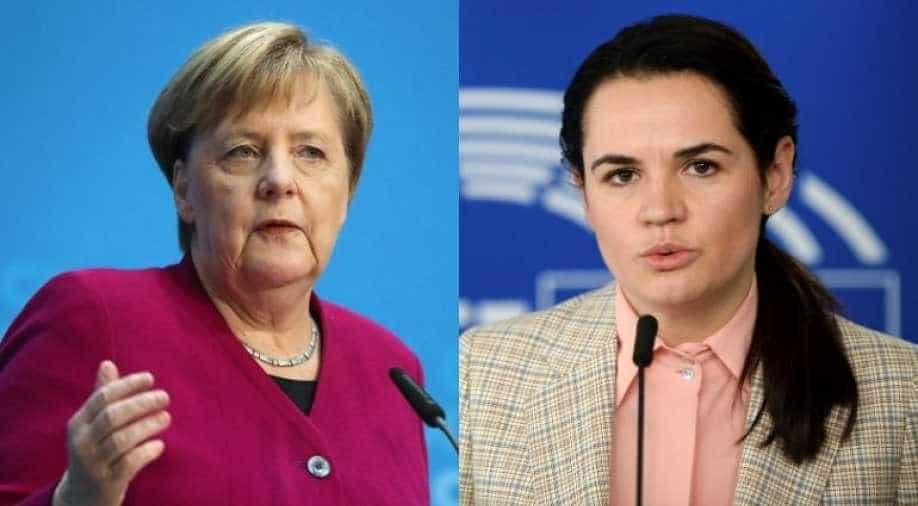 Tsikhanouskaya, who says she won Belarus's presidential election two months ago and accuses long-standing President Alexander Lukashenko of hanging on to power only via massive electoral fraud, is in Berlin to drum up support The meeting came after Tsikhanouskaya's meeting with French President Emmanuel Macron in Vilnius last week, until then the highest-profile Western leader to meet the exiled opposition figure.

Tsikhanouskaya posed for cameras with the German parliament's vice president of the Greens, Claudia Roth and other senior women of the party before they met for talks.

Tsikhanouskaya, who says she won Belarus's presidential election two months ago and accuses long-standing President Alexander Lukashenko of hanging on to power only via massive electoral fraud, is in Berlin to drum up support.

Merkel, whose country holds the rotating presidency of the European Union, has said Germany does not recognise Lukashenko as the winner of the vote and condemned the government's violence against protesters.

"This, our struggle, has not only united the Belarusians in our homeland but in the whole world," Tikhanovskaya told several dozen demonstrators waving red-and-white banners and placards in the German capital Monday evening.

"I learned today that the Belarusians in Berlin, but also in other German cities, hardly knew each other before," Tikhanovskaya told the crowd.

"But this summer, Belarus and Belarusians have united. We don't know how long this struggle will last but we need your help. The government has not heard us for 26 years and it does not hear us now," she added.

The United States and the EU hit Belarus officials with long-awaited sanctions on Friday, drawing an angry response from Minsk and its ally Moscow.

Tikhanovskaya only joined the political fray after her husband Sergei -- a popular blogger -- was barred from registering as a presidential candidate and arrested for allegedly plotting to overthrow the government.

The 38-year-old has met with leaders in Poland and Lithuania, but her talks with Macron have been the most high profile to date.