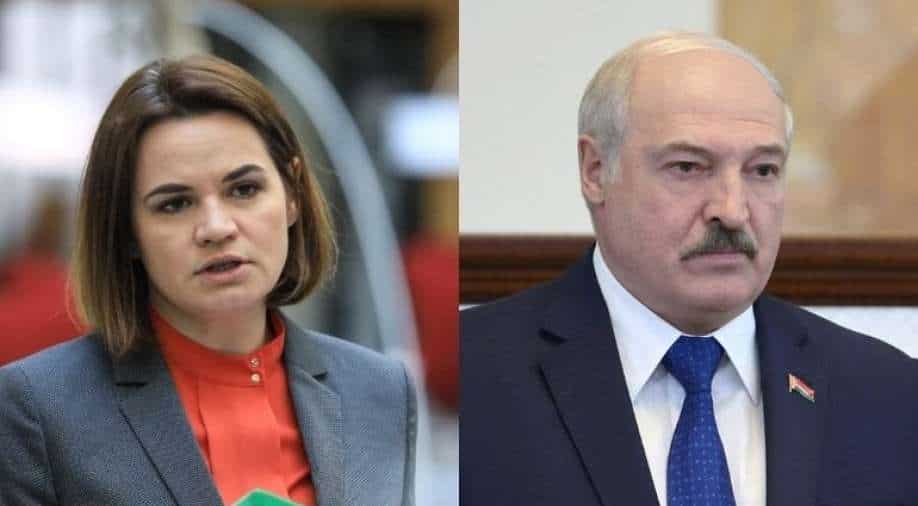 Speaking to the European Parliament via video link on Wednesday, Tikhanovskaya called for a series of concrete measures, including a ban on new foreign investments and on Belarus's main exports like oil and metal products, potash fertilisers and wood

Speaking to the European Parliament via video link on Wednesday, Tikhanovskaya called for a series of concrete measures, including a ban on new foreign investments and on Belarus's main exports like oil and metal products, potash fertilisers and wood.

She also said that the opposition was preparing to stage a new phase of active anti-government protests in Belarus.

The European Union said it was eyeing fresh sanctions on Lukashenko's regime after the plane incident.

European leaders have also demanded the release of Roman Protasevich, the opposition activist who was on board the plane and arrested by Belarus authorities in Minsk.

The 26-year-old activist co-ran the Nexta Telegram channels, prominent voices of the opposition that helped mobilise and coordinate protesters.

Meanwhile, Lukashenko has accused the West of trying to use the diversion of a Ryanair plane at the weekend to wage hybrid war against him and said it had falsely portrayed his handling of the incident.

In his first comments after what some European politicians described as a "state-sponsored hijacking" on Sunday, Lukashenko said he had acted legally and in accordance with all international norms, but that 'ill-wishers' were trying to use the plane episode to try to undermine his rule.

"They (the ill-wishers) have crossed many red lines and have abandoned common sense and human morals."

Airlines re-routed flights to avoid Belarus's airspace on Tuesday and Belarusian planes faced a possible ban from Europe, as international outrage mounted over Minsk forcing down a jetliner and arresting a dissident journalist on board.

Belarusian air control advised the Ryanair flight from Athens to Vilnius to divert to Minsk, according to a transcript, due to what turned out to be a hoax bomb threat. Belarus also scrambled a MiG-29 fighter jet to escort the passenger plane.

Belarusian authorities then swiftly detained Roman Protasevich, a dissident journalist who had been travelling on board the plane, along with his girlfriend. Both face criminal charges.

Lukashenko, according to Russia's TASS news agency, said Protasevich had planned a "bloody rebellion" in Belarus.

The Western response to the plane diversion was part of a "hybrid war" against his country and he would respond harshly to any sanctions or provocations, the Belta news agency reported him as telling parliament.

Mass protests erupted against President Alexander Lukashenko last summer after he declared victory in a presidential election that his opponents said was rigged, but they lost momentum amid a sweeping crackdown by the authorities.

Scientists sound the alarm over virus that 'latches onto humans' just like Covid-19, and is vaccine resistant

Organisation wants meat-eating men 'banned from having sex'. Here's why

As Russia squeezes supply, Germany inks deal with UAE for gas and diesel