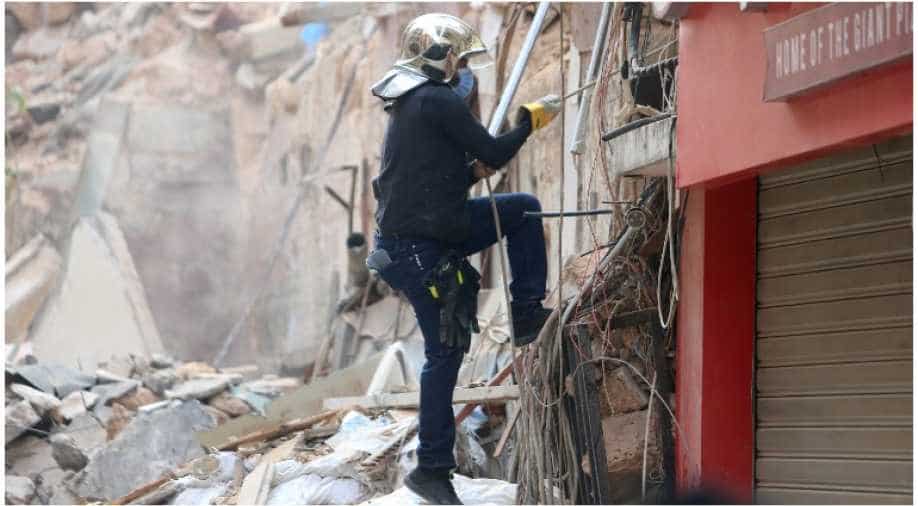 A rescue and salvage worker works amid the rubble in Beirut Photograph:( Reuters )

Authorities in Beirut held ceremonies on September 4 to mark one month of the tragedy that dealt a heavy blow to the city already reeling under economic crisis.

Rescue and salvage teams are still working in Beirut, large parts of which lie in devastated condition one month after the blast.

September 4 marked the completion of a month of the blast that killed at least 180 people and injured around 6,000. The blast took place at Beirut port where 2759 tonnes of highly flammable ammonium nitrate was stored.

Rescue workers are still digging the rubble in the hope of finding survivors.

Rescue workers had detected a 'heartbeat' or a pulse on their sensor equipments in Mar Mikhael in Beirut. Head of the Chilean rescue team even told reporters on Friday that slow breathing had been detected under the rubble.

The workers then set about digging the area. However, no living person or a body was found till Saturday afternoon.

Rescuers are using scanning equipment to create 3D images of the wrecked building, which once housed a bar on its ground floor, to try to locate anyone alive, television showed.

The localities of Gemmayze and Mar Mikhael have been hardest hit due to the explosion.

Authorities in Beirut held ceremonies on September 4 to mark one month of the tragedy that dealt a heavy blow to the city already reeling under economic crisis.

Lebanese government under Hassan Diab resigned in the aftermath of the blast. New government has a huge task ahead of it as Beirut residents are angry and not afraid to express it. Residents still feel that the government is not doing enough to address the situation.

President Michel Aoun followed up on the operation in a phone call with the civil defence head, the presidency said.

Mohamed Houry, 65, said he hoped someone was alive but, even if only bodies were uncovered, "it`s important their families can find peace".