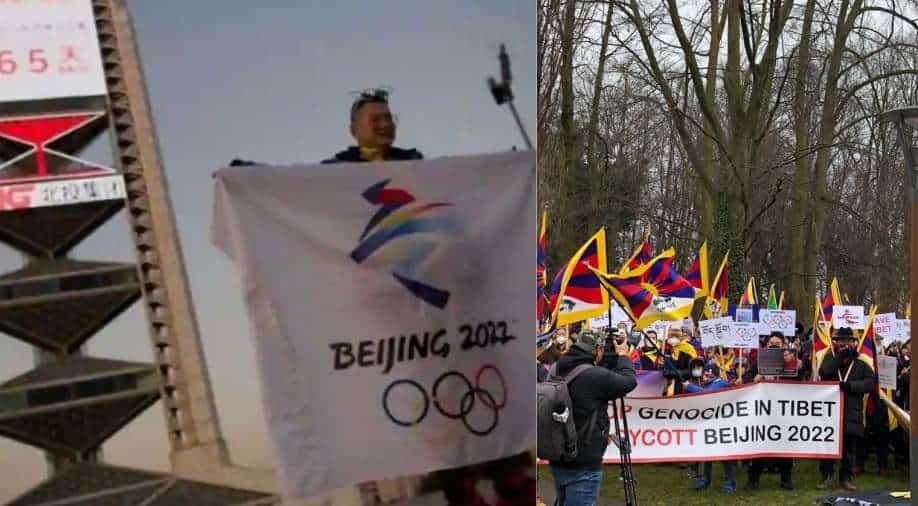 Beijing's 'Genocide Games' kick off amid backlash from all across the world Photograph:( Twitter )

This comes as 308 positive cases have been reported so far linked to the Winter Olympics inside the Chinese closed loop. However, the organisers continue to ensure that the games are safe

Despite all the calls for a boycott, China's ongoing human rights abuses, protests by Chinese citizens living in exile, the 2022 Beijing Olympics have kicked off. The games were inaugurated in a lavish ceremony attended by at least 20 heads of state, including the President of Russia Vladimir Putin, Emir of Qatar, the Crown Prince of Abu Dhabi and the Prime Minister of Pakistan.

This comes as 308 positive cases have been reported so far linked to the Winter Olympics inside the Chinese closed loop. However, the organisers continue to ensure that the games are safe.

From Japan, Switzerland, to the US and India, demonstrations are being held all over. In Tokyo, demonstrators were seen rallying outside the Chinese embassy slamming China for the persecution of the Uyghur Muslims, Hong Kongers, Mongolians and Tibetans.

They also burnt the Chinese flag.

In San Francisco, demonstrators urged people to not watch the games and asked athletes to decline the medal.

In Switzerland, Tibetans marched outside the office of the International Olympic Committee as they accused the Swiss-based organisation of complicity in China's crimes.

Meanwhile, an Uyghur, who was a part of the group of students chosen to help carry the Olympic flame before the 2008 Summer Games in Beijing, has been calling for a boycott of the upcoming Winter Games over China's treatment of the Uyghur ethnic community.

Kamalturk Yalqun, who was one of the torchbearers at the age of 17, is an activist in the United States now. He is currently living in exile in Boston.

In an interview, Yalqun said, "It seems to me that our sense of global citizenship and sportsmanship is not moving forward with these Olympic Games anymore."

Yalqun is disappointed with only the diplomatic boycott as he wants a full boycott of these games.

"It should be a collective responsibility when such kind of atrocities are happening. It's heartbreaking for me to see such a cold response from people," he said.