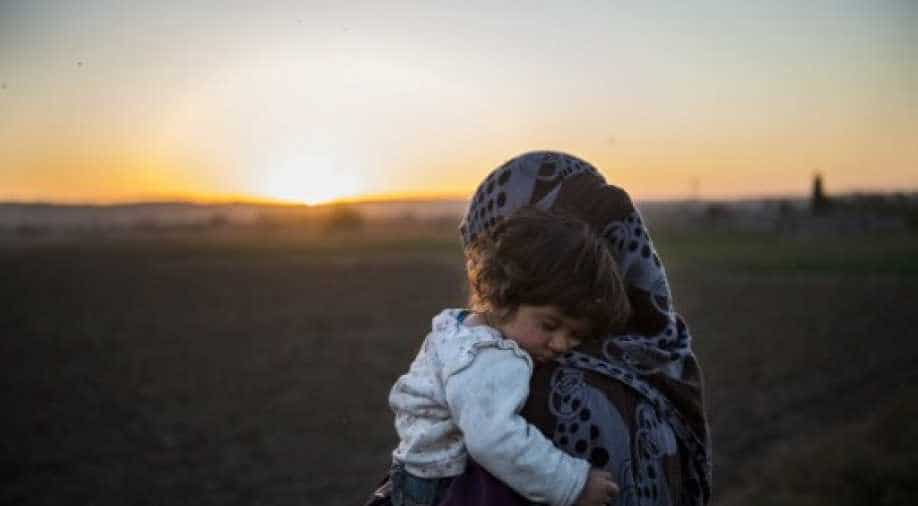 Islamic State has been holding villagers around Mosul hostage so that they can use them as human shields against the US-backed offensive. Photograph:( AFP )

US-backed Iraqi troops expanded their foothold on the eastern side of Islamic State's stronghold of Mosul on Friday, as the group pledged to mount more suicide attacks on their offensive to take the city.

The elite Counter-Terrorism Service (CTS) stormed Tahrir district on the northeastern edge of Mosul, the last major city under control of the Sunni hard-line group in Iraq.

A Reuters correspondent reporting from the CTS-held line in Tahrir saw civilians streaming out of the nearby Aden district where fighting blazed, pushing trolleys containing their belongings and carrying home-made white flags.

The women were still shrouded in black robes imposed by the militants but most had uncovered their faces as they fled intense fighting.

Militants have been steadily retreating from areas around Mosul into the city since the battle started on October 17, with air and ground support from a US-led coalition.

"The advance is slow due to the civilians," said CTS Lt. General Abdul Wahab al-Saidi, adding that the US-trained unit aims to clear the rest of the neighborhood during the day.

A Friday prayer sermon referring to "mujahideen", or holy war fighters, could be heard coming from a mosque under control of the jihadis in the vicinity. An armed man, possibly a sniper, was in the minaret of the mosque.

As the offensive entered its second month, Iraqi government forces are still fighting in a dozen of about 50 neighbourhoods on the eastern part of Mosul, which is divided by the Tigris River that runs through its centre.

Militants are dug in among the civilians as a defence tactic to hamper air strikes, moving around the city through tunnels, driving suicide car bombs into advancing troops and hitting them with sniper and mortar fire.

A loud explosion was heard several streets away from the CTS lines. An officer said it was a suicide bomber who blew himself up after being surrounded in a house. The CTS unit was using adrone to try to detect insurgents.

The number of fighters who are ready to blow themselves up is increasing, an insurgent commander told Islamic State's weekly magazine, al-Nabaa, published online on Thursday.

"We're giving you the good news that the number of brothers ready for martyrdom is very large and, with God's grace, the brothers who are demanding martyr operations are increasing," said the commander, who was not named.

The offensive to take Mosul, the largest city under Islamic State control in either Iraq or Syria, is turning into the biggest battle in Iraq's turbulent history since the US-led invasion that toppled Saddam Hussein in 2003.

The CTS became the only unit to have breached the city limits on its eastern side two weeks ago. Other army units have yet to breach the northern and the southern sides.

Iranian-backed militias earlier this week announced the capture of an air base west of Mosul, part of their campaign to choke off the route between the Syrian and Iraqi parts of the caliphate Islamic State declared in 2014.

Iraqi military estimates put the number of Islamic State fighters in Mosul at 5,000 to 6,000. Facing them is a 100,000-strong coalition of Iraqi government forces, Kurdish fighters and Shi'ite paramilitary units.

Iraqi authorities have declined to give a timeline for recapture of the whole city, but the battle is likely to last for months. Militants have launched waves of counter-attacks against advancing forces, tying them down in lethal urban combat in narrow streets still full of residents.

The Islamic State commander cited in al-Nabaa said the battles with the Shi'ite paramilitary groups known as Popular Mobilisation west of Mosul will continue "in long episodes".

Iraqi authorities have not published a casualty toll for the Mosul campaign overall - either for security forces, civilians or Islamic State fighters. The warring sides claim to have inflicted thousands of casualties in enemy ranks.

Nearly 59,000 people have been displaced because of the fighting, moving from villages and towns around the city to government-held areas, according to UN estimates.

The figure does not include the thousands of people rounded up in villages around Mosul and forced to accompany Islamic State fighters to cover their retreat towards the city as human shields.

In some cases, men of fighting age were separated from those groups and summarily killed, according to residents and rights groups. Human Rights Watch said on Thursday more than 300 former police officers were likely killed last month and buried in a mass grave near the town of Hammam al-Alil, south of Mosul.

Mosul's capture is seen as crucial towards dismantling the caliphate, and Islamic State leader Abu Bakr al-Baghdadi, believed to have withdrawn to a remote area near the Syrian border, has told his fighters there can be no retreat.