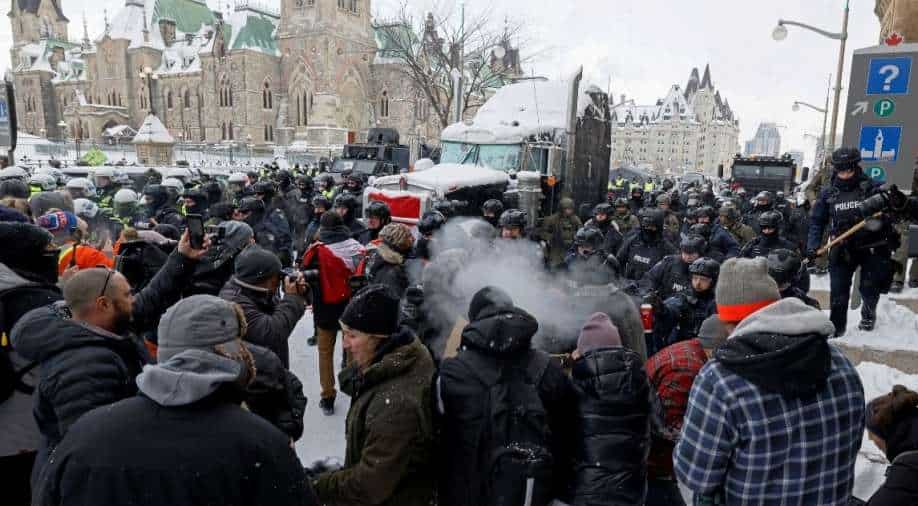 Canadian police officers face off with protestors on Parliament Hill, as they work to restore normality to the capital while trucks and demonstrators continue to occupy the downtown core for more than three weeks to protest against pandemic restrictions in Ottawa, Ontario, Canada, February 19, 2022. Photograph:( Reuters )

A senior police official in Ottawa stated that protesters, who have been filmed by police, will be held accountable

Canadian police on Saturday (February 19) used batons and pepper spray in an attempt to remove the demonstrators who are currently occupying the streets of Ottawa to protest against pandemic restrictions. Police have also made dozens of arrests.

It's been more than three weeks, protestors have paralyzed the Canadian capital by parking and camping on the streets.

Ottawa's Interim Police Chief Steve Bell said on Saturday said, "This operation is still moving forward. It is not over and it will take more time until we have achieved our goals."

As per reports by news agencies, police have made 170 arrests and towed 53 vehicles since they began efforts to bust up the protest on Friday. The action required Prime Minister Justin Trudeau to invoke rarely used emergency powers.

The demonstrations started as the protesters initially wanted an end to cross-border COVID-19 vaccine mandates for truck drivers.

However, the blockade turned into a demonstration against Trudeau and the government.

"Police are making their way through the streets methodically and responsibly. This is encouraging, but the work is not yet done," Public Safety Minister Marco Mendicino said on Saturday.

Ottawa's Interim Police Chief Steve Bell further stated that protesters, who have been filmed by police, will be held accountable. "We will actively look to identify you and follow up with financial sanctions and criminal charges. ... This investigation will go on for months to come," he said.